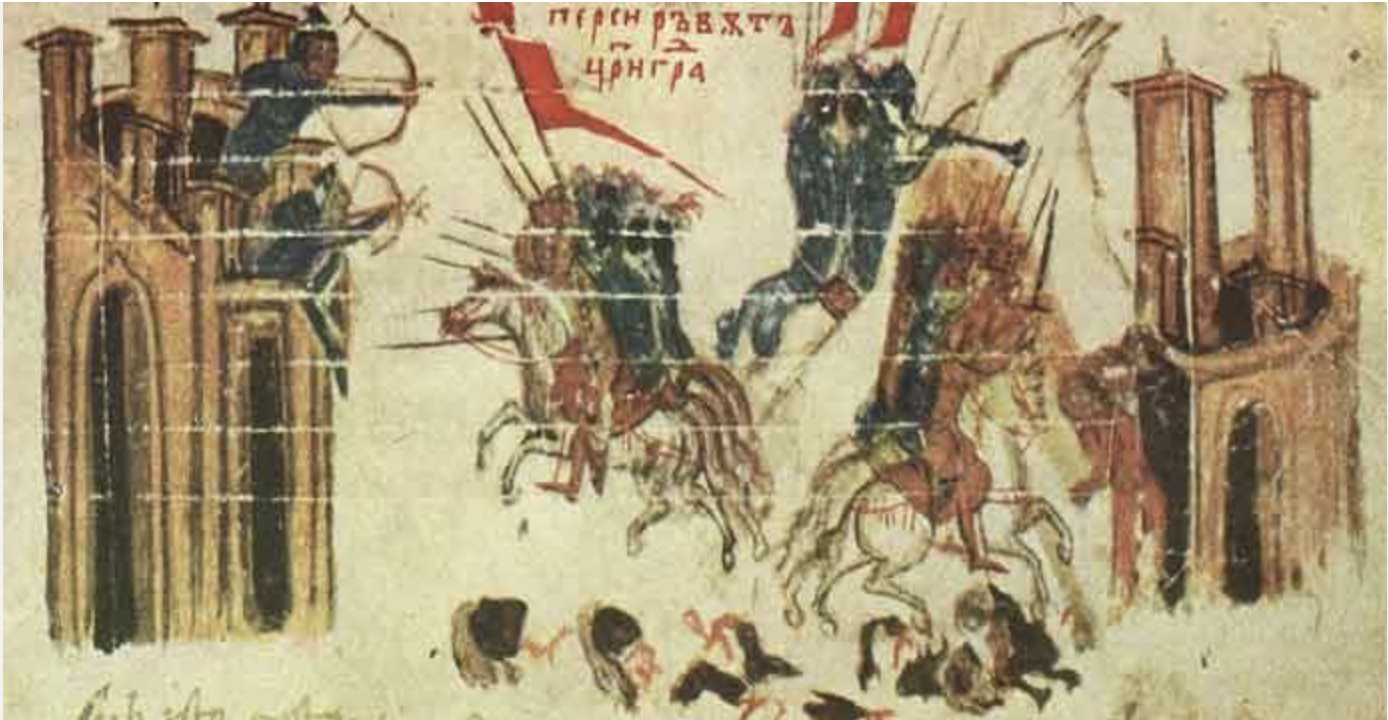 On 7 August 626, faced with an inability to breech the sea walls at the Golden Horn area of then-Constantinople, the Slav fighters supporting the Avar army melted away back into the Balkan hinterlands.  The combined army of Avars, Slavs, and Persians were unable to take Constantinople, which stood until the Ottoman victory in 1453.

The Balkans were an entirely different manner.

Due to population shifts outside the Balkans and a weakening Roman Empire, bloody raids and pillaging began with the Hun onslaught in the 450s.  The Huns had been driven out of the Steppes by the expanding Avars, and they were merciless as they rampaged through Europe.  The Romanized settlers, who had replaced the native Illyrians and Thracians five hundred years earlier, fell by the thousands.

The Huns retreated, but they were soon replaced by the Avars – driven out of the Steppes in their turn by Turkic Tribes. The Avars brought with them, as subordinate troops, the Slavs. Their first raid south of the Danube was mentioned as taking place in 518 by the Byzantine historian Procopius, and these raids proved to be every bit as bloody and decimating as the earlier Hun raids. Famine accompanied their raids, and plague began to stalk the area again. The Balkans, well-settled and possessing advanced cities and literacy under Roman domination, was facing a demographic crisis in the form of depopulation.

Depopulation actually suited the invading Slavs just fine, as unlike the Huns and Avars they had no plans to leave the fertile Balkans.  They were not interested in the developed Roman cities, and in the Balkans they did not build large enclosed strongholds. Southern Slavs preferred smaller and more rural settlement cells, župa, connected through various family ties.

Rome, under Emperor Maurice in Constantinople, gave one last gasp of attempt to hold back the tide of Slav settlement between 582 and 602.  Planning to settle armed Armenian peasants near areas where Slavs had created communities, Maurice saw an opportunity to Romanize the invading settlers and rebuild and repopulate the ravaged Balkans.

Unfortunately, the Byzantine army was not thrilled with Maurice’s plan, especially when spiraling costs and falling income caused him to cut army salaries and continue the Balkan campaign through their exhaustion.  In 602, a minor official named Phocas was installed as Emperor.  He immediately executed Maurice.  It is the execution of Emperor Maurice, on 27 November 602, that dates the fall of the Roman Empire in the Balkans.

It wasn’t that Emperor Phocas immediately abandoned the Balkans, his Thracian background made him rather more interested in securing the area for the Empire.  There is evidence that he actually did attempt to hold on in various ways, including attempts to pit the Avars and Slavs against each other and other attempts to pay the invaders off.  But Phocas was also being attacked on another front by the Persian Sassanid Empire.  The Persian war combined with Phocas’s incompetence and brutal nepotism only encouraged the Avars and Slavs.  Their incursions increased.  The population of Christian cities in the Balkans were slaughtered or captured – they were becoming a no-man’s land, wide open for even more Slavs to flood in and create their own nation.

By the time the Byzantines had enough of Phocas and he was overthrown and executed by Heraclius in 610, the damage was done.  The Balkans were irretrievably lost to the Roman Empire. Emperor Maurice’s plan and campaign had merely pushed back the Slav settlement of the Balkans by twenty years.

A savage renewal of Avar and Slav pillaging occurred in the Balkans from 612 to 626, with cities such as Justiniana Prima being fully destroyed, and even Salona (near what is now Split in Croatia) nearly collapsing.  Alongside the destruction, archaeological evidence of Slav settlements are seen from 620.

Those settlements seem to have given the Slavs a feeling of power, because close on the heels of the appearance of settlements was the first Slav uprising against their Avar overlords in 623.  The loss at the walls of Constantinople proved to be the final straw in Avar dominance – after the 626 loss the Avar Khaganate partially collapsed.  By 790 they had ceased to exist.

And so the mercurial tides of history saw two great conquering empires collapse within two hundred years, while the Slav client state not only managed to survive, but emerged as the supreme regional power.  Their power would survive for over 800 years, and their culture would continue to dominate through the modern day.

“…although they derive from one nation, now they are known under three names; the Veneti, Antes, and Sclaveni.” —Jordanes, Byzantine Historian, 551

The Slavs seemed to fight each other as they settled Eastern Europe as often as they fought everyone else.  Some historians have used these reports to attempt to separate Slavs into different ethnic groups, but Procopius reported in the sixth century that the different groups still spoke the same language.  Indeed, the close relation of Slavic languages even in the modern day point to a common origin that is difficult to attempt to explain away.  The different names and categorizations seem to be more akin to referring to Americans by their state of residence rather than by their national identity.  That being said, the Sclaveni seem to be the ethnogenesis of the Southern Slavs, although smaller groups of the same Slav origin that were later referred to as “Serbs” and “Croatians” were a part of the same wave of emigration.

Physical descriptions of the Slavs don’t separate them by tribal affiliation, either.

“All of them are tall and very strong… their skin and hair are neither very dark nor light, but are ruddy of face,” — Byzantine historian Jordanes

The devastation of the Balkans before and during the Slavic invasion erased much of the previous Roman influence.  Christianity nearly disappeared for three hundred years, replaced by a Slavic paganism that was inspired by nature and saw spirits around inanimate and everyday objects like trees, rocks, and springs.  These beliefs persist today, as do many of the Slavic gods – although they have been refashioned into the more acceptable Christian saints.  Literacy nearly disappeared, urged on by the Slavic dislike of large cities, emphasis on rural lifestyles, and unwillingness to subordinate to anything that seemed associated with Rome (including an alphabet).  As a result, the years between the fall of Rome in Eastern Europe and the emergent movement toward an Eastern Christianity through Saints Methodius and Cyril in the ninth century are still a dark age.

We known the Slavs came.  We know they dominated.  But we don’t really know much of what happened and developed in the Balkans between 700 and 850.  And that dark hole of history has attached itself to the Balkans ever since – even after history returned, the Balkans remained an unknown and unfamiliar frontier.