Makeda – the Woman Who Created an Empire

HomeEthiopiaMakeda – the Woman Who Created an Empire
Let's Start 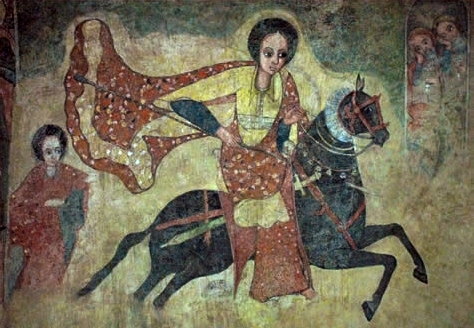 Makeda – the Woman Who Created an Empire

The legends in Ethiopia say that sometime around the year 1000 BC, their beautiful Queen Makeda heard about the wise King Solomon and the glistening jewel of his city Jerusalem from a trader and decided to travel to see him herself.

Their meeting, the meeting between King Solomon and the Queen of Sheba, is mentioned in the Bible; in 1 Kings 10 and in II Chronicles 9.  The biblical references leave no doubt that the meeting of the two was a smashing success, “King Solomon gave the queen of Sheba all that she desired and asked for, besides what he had given her out of his royal bounty.  Then she left and returned with her retinue to her own country.“

The Bible, however, is not the only source of information about this legendary woman.  Three additional sources of various religious records offer more tantalizing details about the famous queen.

The Targum Sheni is a translation of the Book of Esther into Aramaic with some additional commentary that includes further details on the elusive Queen.  In this version, Solomon, who has been given the gift of speaking with animals by God, holds a feast for all the animals of his kingdom.  The woodcock alone refuses to come, as he believes the Queen of Sheba is more worthy of praise than Solomon.

Few men are willing to shrug such a statement off, and Solomon responded by not only inviting the queen (to pay him homage, of course) but by sending a spirit to carry her throne from Sheba to his palace where it was placed in a glass room.  The stately queen is impressed with the room and the appearance of her throne, but she is not going to just throw away her esteem.  She sets one further task for Solomon – to answer three riddles.  Solomon answers them satisfactorily and the Queen of Sheba agrees that he is worthy of her tribute.

Although certain elements of the story don’t paint the Queen in the best light (she is seen to have hairy legs in one part as she lifts her skirts to walk across the glass floor that she believes is water), in the end she is shown as the master of her own destiny.  If Solomon wants her to pay homage, he is going to have to show her that he deserves it.

The Islamic version of the Queen of Sheba story that is in the Suras goes along much the same lines as the Targum Sheni, but more detail is added.  In this version, the Queen’s name is Bilqis, and the bird that does not come to the feast is a hoopoe who reports back to Solomon that Queen Bilqis and her people worship the sun.  That, of course, cannot stand, and the story again moves forward with the Queen being summoned to appear.  Djinn carry off thrones, crystal pavilions are created, and in the end – as in the Aramaic version – the Queen submits to Solomon and his God.  And although the official version ends there, Islamic legend reports a wedding between the two monarchs.

The longest and most detailed account of the Queen’s encounters with Solomon are, unsurprisingly, from Ethiopia itself.  Within the Kebra Nagast (The Glory of Kings), the Queen’s name was given as Makeda, and she travels to Jerusalem on her own accord after hearing about the wisdom of its ruler and the beauty of the city.

Rather than djinn and tricks, Solomon and the Queen spend hours in conversation, and at the end of their visit she converts to Judaism. Other plans are in the work, however.

Solomon throws a great feast as a farewell gesture for Makeda, and assures her that he will not touch her before she leaves if she promises not to steal anything from him – a caveat that would sound vastly insulting to nearly anyone.

Makeda agrees, and after a large and spicy dinner she falls asleep, to awaken in the middle of the night afire with thirst.  Seizing a bowl of water left in her room by the king, she begins to drink – and is surprised by King Solomon, who reminds her of her promise not to steal.

Queen Makeda agrees to sleep with the King – and here one has to ask if she had such an outcome in mind herself, because getting a drink of water in the middle of the night seems like an absurd stretch of the “no stealing” rule.

Makeda leaves as planned, but before she goes Solomon gives her his ring.

And Makeda passes that ring on to to the baby she gives birth to as she travels home.

The son she had with Solomon, Menilek I, was raised in Judaism.  When he reached adulthood he asked about his father and Queen Makeda gave him Solomon’s ring and sent him to Jerusalem, where Menilek studied Torah for several years, until it was time for him to return to his home in Sheba.  Solomon ordered that the first-born sons of his nobles accompany Menilek, one of whom decided it would be great fun to replace the Ark of the Covenant with a replica and hie off with the original.

When this perfidy was discovered, Solomon went after his son and was only stopped by the voice of God in a dream telling Solomon he had intended the Ark of the Covenant head to the hinterlands of Sheba all along.

Where, according to legend and the Church of Our Lady Mary of Zion in Aksum, it resides to this day.

Menilek I would go on in legend to found the Solomonic Dynasty that ruled Aksum and then Ethiopia until Haile Selassie was deposed in 1974 – a reported 225 generations after his ancestor Queen met with the Biblical King.

Of course, legends cannot be counted on as the full truth, and the stories of the Queen of Sheba are no exception.  Scholars went back and forth for years as to whether the “Sheba” mentioned in the Bible was actually Ethiopia or was perhaps Saba in what is now Yemen.  Most modern historians leaned toward an interpretation of Yemen, but in 2012 and 2015 archaeologists discovered tantalizing clues, a literal gold mine, that perhaps led the search for Makeda back to Ethiopia.  Further genetic studies, as well, identified an injection of Levantine genetics into the gene pool of the Aksum area approximately 3000 years ago – a number that would coincide exactly with the 1000 BC dates of legend.

Unfortunately, the truth of history is not a Gordian knot to be sliced in half, and studies continue on. There is an abundance of literary tradition  of the Queen of Sheba’s existence, but no archaeological record has been unearthed.