The highest ranking ANC official assassinated outside of South Africa is hardly known in the country for which she gave her life.

On 29 March 1988, Dulcie September, the ANC Chief Representative in France, Switzerland, and Luxembourg, was killed with five rifle shots to the head as she entered the ANC offices in Paris.

To this day no one has been held accountable for her death, and France actually closed the case four years later for lack of evidence.

Dulcie believed entirely in the anti-apartheid cause, and had given up her life to it.  An early  member of anti-apartheid and equality groups while she trained as a teacher in South Africa, she was arrested and detained on 7 October 1963 before being charged with “conspiracy to commit acts of sabotage and incite acts of politically motivated violence.” She spent five years in prison, and an additional five years after her release being “banned” – unable to travel, work in her profession, and under onerous reporting conditions. September spent her imprisonment at least partially in the notorious Roeland Street Prison, known as the “Black Hole of Cape Town.”  She was physically and mentally tortured during her stay particularly after it was discovered that she was running reading classes and teaching politics to other inmates.

At the end of her banning order she obtained a job in Britain, and after being granted a permanent visa to leave the country moved to London to continue her anti-apartheid activities.

By 1983 she had been appointed the ANC Chief Representative in France, Switzerland, and Luxembourg and she used her position to great effect.

Two things in particular may have marked her out for assassination: 1) her work on the Albertini Affair – managing to get the French government under Francois Mitterrand not to recognize the new South African ambassador until an arrangement for release of a French citizen being held in South Africa was settled; and 2) her investigation of the connections between the French arms industry and the South African apartheid regime.

As September investigated the connections between the French arms industry and the South African government, the harassment stepped up.  She submitted a report detailing break-ins, suspicious incidents, and evidence of phone bugging to the ANC.

“On two occasions that I am aware of I have been photographed – once in the street outside the office and once in Gare du Nord station while standing on the platform waiting for the train to the suburbs.  On both occasions the persons photographing me hurried away when they became aware that I was aware what was happening. “

Despite requests to both the ANC and the French police, Dulcie September received no protection.  As her associates stated, September was “a soft target.“ 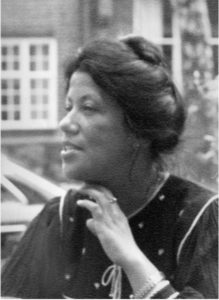 For more than 30 years, Dulcie September’s contribution and death for the anti-apartheid cause have been mostly ignored, but lately an upswell of interest has started demanding answers.  In 2019 a podcast by Sound Africa, They Killed Dulcie, ran for seven episodes.  In 2021 a documentary about Dulcie September’s life and assassination was released.  Called Murder in Paris, it lays out the evidence of involvement and brings Dulcie’s life to the forefront, to be remembered as she deserves to be.

For more information about the history of South Africa, please click here.