The speeches of Marshal Tito of Yugoslavia were the stuff of legends.  Charismatic and having shown unquestionable bravery as a Partizan, Tito was constantly communicating with the Yugoslav public through speeches and interviews with the press.  It was easy for many Yugoslavs to focus on the public persona of a national head who so perfectly mirrored the head of the Balkan family and to sweep away any evidence of a government that pursued detractors with single-minded resolve.  Particularly in light of the bloody breakup of Yugoslavia in the Nineties, Tito’s message of a unified southern Slav peoples who were at the forefront of history  resonates with many as a golden era.

People go back to the history of their people, start rummaging through it and forget about the future development of our socialist community as a whole. None of our republics, on its own, would be anything if we were not all together. By strengthening our unity in the future, we must create our own, Yugoslav socialist history, without touching the national right of individual republics to cultivate their traditions, not to the detriment but in the interest of the entire community. That is our path, that is what we want, not the breaking of our unity. We do not think, as various civic elements that have not merged with socialist thought in our development and that also affect some communists, that we should return to the old way.  — 1962 speech in Split, Croatia

Initially allies, when Tito and Stalin split in 1948 there was no question that Stalin had the larger platform and ability to relate his side of the argument more effectively.  And yet, by 1949 it was Tito who was being courted by the West.  Far from being silenced by the Soviet rejection, Yugoslavia became a prize that both sides of the Cold War aimed to win.

We are not going to pay the balance on others’ accounts, we are not going to serve as pocket money in anyone’s currency exchange, we are not going to allow ourselves to become entangled in political spheres of interest.  Why should it be held against our peoples that they want to be completely independent?  And why should autonomy be restricted or the subject of dispute?  We will not be dependent on anyone again!” —Josip Broz Tito, in response to Soviet attempts to punish Yugoslavia for being “too independent”

Tito and the Yugoslav Partizans had been unapologetic and uncompromising communists as they fought to remove the Nazis from the Balkans.  Although the Soviet Union often promised aid, they were not in a position to give any until 1944, and by that time the Partizans had scored significant victories over the Axis.  As a result, when Tito signed the treaty allowing the Red Army into Yugoslav territory to help with the final push, alone among the Eastern Europe states they were able to receive a promise that the Soviets would withdraw as soon as the objective was achieved.  The Red Army followed the agreement, and although advisors were left behind, after Belgrade was taken the Red Army was redeployed to areas where they were more urgently needed and Yugoslavia was not occupied like so many other Eastern European nations. But even then there were moments of difficulties in the relationship between the two communist leaders.

I had difficulties with Stalin when I was informing him through the Comintern on that. I reported that we were exchanging prisoners with the Germans, bearing in mind, among other things, that we were starving, that people were falling dead from exhaustion. He answered me very rudely, resenting us for exchanging prisoners with the enemy. And with whom else to exchange them, if not with the enemy? Then I answered Stalin briefly: if you cannot help us, leave us alone, we will manage somehow. When I met Stalin in Moscow in 1944, he sharply resented me for such an answer. I looked at him and said: “Comrade Stalin, if you had been in my place, you would probably have written even more rudely. Then he fell silent. Because It was a hard time. You see people starving to death, and yet you have to fight. However, even today there are attempts to tendentiously interpret and abuse this exchange. We will write it all exactly as it was. I am convinced that almost everybody will approve of what we did then. We had to do it. We saved about a hundred of our people, good fighters and activists.

The Tito-Stalin Split came as a shock to many, but in the end it provided a new opportunity for Yugoslavia, not to be a mere Soviet Satellite, but to spearhead a movement that would give smaller and less developed nations a chance and a choice outside of the bipolar Cold War world.  Several of the Non-Aligned Nation leaders were dictatorial in their own right, and often misappropriated the wealth of their respective nations and led regimes that were no less ruthless and cruel than the colonial governments had been.  But the creation of a third way gave yet another choice to nations who were unable to stand  alone, even if the ideal could not be achieved.

Non-aligned politics, followed by Yugoslavia, has given, as it is well known, enormous results in the fight for peace and social progress. Today, Non-aligned countries are the main proponents of equal relations in the world, relations without any discrimination and interference in the internal affairs of others. At the same time, they show the most developed capacity for democratic cooperation in all areas of human and social activity, both in mutual relations and in relations with all other countries. Non-aligned countries are at the forefront of the struggle for creation of a fairer economic order in the world, in which the people of each country should for once use their natural resources primarily for themselves and their own development.

Tito’s personal charm and charisma left fond memories in much of the former Yugoslavia, giving rise to the term “Yugonostalgia“.  Non-hagiographical and honest assessments must still admit that there were limits to freedom in the socialist nation, and a distinct danger to anyone who spoke too loudly against regime policies.

[Action should be taken] against those who are now the loudest, who do the most damage and who have long deserved to be not only isolated but also completely disabled. – 1971 in regards to leaders of the Croatian Spring

Action, to the Yugoslav security machine known in hushed terms as the UDBA, could mean several things and none of them were good.  Imprisonment on Goli Otok was always a possibility, as was being targeted for killing.  The UDBA was known to reach outside Yugoslavia and Stjepan Đureković. 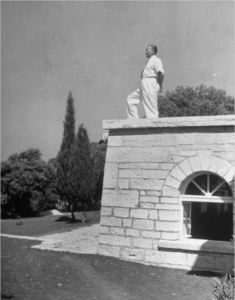 But Tito’s background as a Partizan who had shared in the war sacrifice of Yugoslavia, and had been born into a peasant family resonated with most Yugoslav people.  Photos of Tito visiting villages and making use of his childhood background in agriculture led to a level of trust that was unequaled in almost any other world leader.

Tito also had an eye for optics and narrative.  Always one for a photo with children, he also encouraged dissemination of his affinity for and mastery of animals of all types.  Foreign leaders would gift him native animals, which found their way to his zoo on Brioni.  Yugoslavs all knew the story of how Tito’s life had been saved at Sutjeska by a German Shepherd that devoted itself Tito after being left abandoned by the Italian army.  And photos of Tito hunting, on foot and on horseback, were readily available.

In that case, your shot must have gone up the hole under the boar’s tail.– Tito to Nicolae Ceausescu when Ceausescu claimed to have shot the same boar Tito brought down on a hunt

Yugoslavia came to be indelibly tied to the image of Tito, so much so that in 1963 he was created President for Life.  He would spend the rest of his life representing Yugoslavia to the nations of the world, a sought-after guest of world leaders and hunting partner of the Soviet leadership that had unceremoniously jettisoned Yugoslavia in 1948.

I work a lot so I don’t have time to grow old.

Tito’s world charm campaign had monumental results.  When he died in 1980, his funeral was attended by representatives from 128 countries and included presidents, prime ministers, kings, and princes.  The Secretary-General of the United Nations was also in attendance, as was a delegation from the Arab League.  Attendees were from nations on both sides of the Cold War, with special appearances by Tito’s Non-Aligned compatriots.  Overcome with grief, Kenneth Kaunda of Zambia was seen sobbing as he viewed Tito’s casket.

This is a world leader who has led his people and protected their freedom almost for the last 40 years. Through peace and war, he has been part of the personal history of the world during our own generation and the previous generation.

James Reston, who interviewed President Tito recently, said that he is the last political giant of this century. He’s a man of eternal strength, of eternal youth, of eternal vigor, and of eternal courage. — US President Jimmy Carter, 1978

To read more about Tito and Yugoslavia, please click here.