When Archduke Franz Ferdinand and his wife the Duchess Sophie came to Sarajevo on 25 June 1914, they were ushered into a suite at a spa resort in the nearby municipality of Ilidža.

The room, decorated in a Turkish style in vogue at the time, was provided by a local Jewish merchant from the Baščaršija named Elias Kabiljo and arranged by his wife.

The Imperial couple loved it.  “Our quarters are beautiful,” Franz Ferdinand cabled his children after his arrival.  The evening of their arrival they made an impromptu visit to Baščaršija, where they visited Kabiljo’s shop and purchased even more items to be sent back to Vienna.

The Duchess Sophie was a target of many within the Imperial family after the couple’s morganatic marriage; subject to humiliations as petty as her official portraits being retouched to look older and uglier.  In Sarajevo, however, Sophie was greeted with cheers.  As she visited charities and women’s groups and toured the city, Sarajevo’s population gave her the love and respect she did not receive in Vienna. 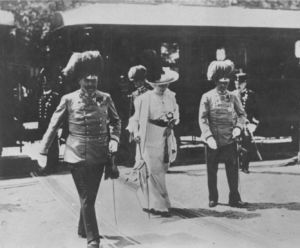 His wife’s welcome affected Franz Ferdinand deeply.  Although he fought against making the visit to Bosnia and Herzegovina, during the couple’s last dinner at the Ilidža hotel he raised a toast, saying, “I’m beginning to fall in love with Bosnia.  If I still had prejudices, they are gone now.“

The morning of 28 June dawned bright, and the Imperial couple began the day in the private chapel that the hotel had provided for them.

One month later, the world was at war.

For more about World War I and how the conflict came about, please click here.