The Third Way or the Only Way

HomeYugoslaviaThe Third Way or the Only Way
Let's Start

The Third Way or the Only Way

Once when I came from Kiev to Moscow, I was invited to visit Stalin, who, pointing to the copy of a letter lately sent to Tito, asked me, “Have you read this? ” Not waiting for my reply, he answered, “I will shake my little finger-and there will be no more Tito. He will fall.”

–N. S. Khrushchev in his Secret Speech, at the Twentieth Congress of the CPSU

There is no doubt that one of the pivotal events in the history of Yugoslavia was the Tito-Stalin split in 1948. Tito’s historic NO came as a surprise not only to Stalin but also to the rest of the world split into two blocs. But why and how did it come to this split? What were its consequences? And what led to the reconciliation of Yugoslavia and the USSR?

After the end of the brutal World War II, the world went through another, this time ideological war – the Cold War, that would last for almost 44 years. As a consequence, two warring sides were created- the Western states and the states in the Warsaw Pact. USSR was like a big brother surveilling each of the real socialist states- their model of real socialism was supposed to be followed in all states in the Warsaw Pact. To ensure cohesion among these states, the Communist Information Bureau, or Cominform for short, was created in 1947 with the seat in Belgrade.

As a fledgling real-socialist state, Yugoslav loyalty to USSR was unquestionable. However, there were some underlying problems in this relationship. First, there was some resentment on the Yugoslav side because Stalin refused to offer military aid to Yugoslavia at the beginning of the war. Second, there were rumors that the USSR and the United Kingdom wanted to divide Yugoslavia into Soviet and British spheres of interest. Third, the USSR wanted to establish firm control of the Yugoslav economy by creating joint companies. These are just some of the reasons why in 1948, instead of accepting the role of a puppet Soviet state, Tito stood up and said NO to Stalin and the USSR. Of course, Stalin would not watch this silently. On 28th of July 1948, on St. Vitus Day, Yugoslavia was expelled from the Cominform for the alleged perversion from the Soviet model of real socialism, taking up the path of nationalism, and for the betrayal of the fight against imperialism. While Tito flatly rejected all of these accusations, he was careful enough to show loyalty towards the USSR. In Borba, Tito acknowledged that:

Some argue that at the beginning, Tito was not even aware of the impact his refusal would have on Yugoslavia. He even thought that the USSR would not go so far as to punish them by expelling Yugoslavia from the Cominform. It would take about six months for the Yugoslav leadership to decide on which course the state would take. In December 1948, Edvard Kardelj set forth the path Yugoslavia, as well as other future socialist states, would follow. The doctrine he set forth is known as Many Roads to Socialism. With this doctrine, Kardelj asserted that each state had specific “conditions, levels of economic development, different cultures, mentalities,” and on that basis, each of them should find and follow their own path towards socialism guided by the Soviet experience. The USSR, however, considered this doctrine as a sacrilege.

The Yugoslav leadership would continue to demonstrate their allegiance towards the USSR all until 1949 when the Warsaw Pact states started the economic blockade against Yugoslavia. From then until Stalin’s death, Yugoslavia would be in constant fear of the Soviet attack. Despite this fear, Yugoslavia chose a path towards socialism that was different from the Stalinist model. Completely alone in the world that was divided into two blocs, in 1961. Yugoslavia would establish the Non-Aligned Movement along with 120 developing states. This move demonstrated Tito’s brilliance and strength as the leader of the states who did not want to be part of any of the warring sides. You can read more about the Non-Aligned movement in this article.

Although both the USSR and Yugoslavia followed the philosophy of dialectical materialism, the two models diverged after the split. One of the differences between Stalinism and the Yugoslav model of socialism was in their foreign policies. Unlike other real socialist states, Yugoslavia was the only state with independent foreign policy – Yugoslav foreign policies were made in Belgrade and not in Moscow. The Yugoslav leadership also rejected the central direction of the international workers’ movement advocating for equality between national workers’ parties.

The greatest difference between the Yugoslav and Soviet/ Stalinist model of real socialism was reflected in the fact that the highest form of ownership in the USSR was state ownership. Tito and Kardelj criticized this, claiming that it was in contrast with the Marxist-Leninist view. According to this view, the nationalization of the means of production is the lowest form of socialization. The ultimate aim is to transform the nationalized property into the socialized property by giving it into the hands of workers to manage it. This is where the Stalinist system failed. For that reason, Tito labeled this Soviet system as the system of state capitalism. Moreover, Boris Kidrič, who was a member of Politburo, stated that the Soviet “bureaucratic centralism led to monopolistic capitalism,” and that Stalinism was “the most treacherous counter-revolution the history has ever seen.” The alternative, according to Kidrič, was the model that came to be known as self-governing socialism.

Another problem with the USSR model was that it did not follow the concept Engels called “the withering away of the state.” The basic premise of this concept is that after the establishment of state socialism and nationalization of the means of production, state inference in social relations should gradually wither away. And although the USSR established socialism, the state never withered away under Stalin. In fact, it was so strong that it turned into the dictatorship of the bureaucracy. To prevent the rule of the bureaucratic class, once socialism was established in the state, Yugoslavia started decentralizing the powers of the state. This was done in the following three ways:

Although some revisionist historians argue that the Stalinist and Yugoslav models of socialism were similar when it comes to the purges of their political opponents, the truth is that this is incomparable. Gulags were located in different towns in Siberia, while the most (in)famous political prison in Yugoslavia was located on Goli Otok (or the Barren Island). While there were numerous reasons one could end up in Gulag, the political prisoners in Yugoslavia were mostly accused of being Stalinists. According to some estimates, 1.2 to 1.7 million people perished in Gulags.  The number of casualties on Goli Otok, on the other hand, is much lower. According to the official estimates, 446 people died on Goli Otok in the period of 1949.-1986. You can find the names of all political prisoners, as well as those who died on Goli Otok, in the link provided here.

So, when did the two states reconcile? The simple answer would be that the process of reconciliation started after Stalin’s death and with the gradual de-Stalinization of the USSR in 1953. The more complex answer is that it took years for these two states to reconcile. The formal step towards the normalization of Yugoslav and Soviet relations was taken on 2 June 1955 with the Belgrade Declaration, where the new president of the USSR, Nikita Khrushchev, formally granted each state the right to interpret Marxism in their own way and proclaimed that each state would be equal to the USSR. That this was just a formal declaration would be obvious after the Soviet intervention in Hungary in October 1956. With the start of the Hungarian Revolution, Tito was in a difficult situation. Although anti-Yugoslav Hungarian leader Matyas Rakosi was overthrown during the Revolution, Tito, afraid of possible unrest among the anti-Yugoslav population, could not watch silently revolution happening right on the state’s border. That is why he supported the Soviet violent suppression of the Hungarian revolution as “a necessary evil to save socialism.”  This way, the Yugoslav leadership managed to stay independent and avoid possible Soviet invasion into Yugoslavia. You can read more about the Hungarian Revolution and how the Yugoslav leadership admitted the revolutionaries in the Embassy of Yugoslavia in this article. 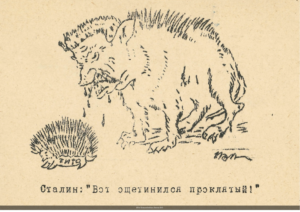