War produces monuments and detritus; which is which often depends on which side of the line you are standing on after the end of the war.

The Greek and Italians famously repurposed old monuments, treating them as detritus which went into building their homes.  Many old villas are built from the remains of older monuments whose original purpose was either forgotten or had grown unfashionable.

The Ottomans and the Byzantines in Turkey before them did a colossal repurposing project, turning monuments into detritus, and back into monuments.  Istanbul’s most famous museum and most visited tourist attraction, the Hagia Sophia, was formerly a mosque, and before that an Orthodox Christian Patriarchal Cathedral, which in turn was built using material from the Church of Constantius on that site and also using columns from the Temple of Artemis in Ephesus, one of the former Seven Wonders of the World.  The Temple itself was rebuilt several times between the Bronze Age and its destruction in 401 AD, using both repurposed and new construction material.

One of the most impressive repurposing efforts in Sarajevo was the construction of the Chapel of Vidovdan Heroes (St. Vitus’s Day).  It is a a tomb that contains the remains of Gavrilo Princip and the members of Young Bosnia who assassinated Archduke Franz Ferdinand and started The Great War, built in 1939.  The Chapel is made of old tombstones from the derelict Orthodox cemetery on what is now the site of the Parliament building.  It was badly damaged and used as a toilet by Bosnian troops during the 1992 – 1995 siege, showing that something can be both monument and detritus at once. 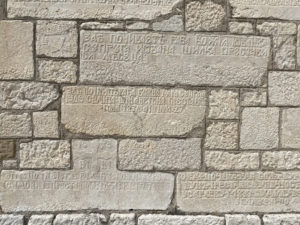 Sometimes, however, a war artifact falls between monument and detritus.  Either it is subject to a historical tug-of-war between winners and losers, or it is just too big to scrap.  The Winkelturme Hochbunker in Novo Sarajevo fits somewhere into this category.  It sits on Put Zivota (Life Way) sandwiched between an office building and a row of abandoned warehouses, across the street from a large railyard.  It has a ridiculous shape for a bunker – a concrete tubular building standing 4 stories high with a conical tip, it looks like a cigar or a strange grain silo.  Half of it is covered in clinging vines, and it is in a wooded area, making it easy to miss unless you know where to look.   The Winkelturme was designed by Leo Winkel in 1934, and sold to the German Army in 1936.  They were used to protect workers in industrial and railways areas; they took a small amount of ground space and their walls were designed to deflect bombs downward, toward the thicker part of the concrete.  The inside of the bunker had several floors and a spiral staircase through the middle; the reinforced concrete walls we thick enough to resist conventional bombing, even in the case of a direct hit.  There were electrical and hand powered air pumps inside, in case workers were under prolonged air attack.  Despite approximately 100 being built in Germany and German-occupied areas during World War II, only 2 were destroyed. The Winkelturme in Sarajevo is in excellent shape having been built sometime between the Nazi occupation of the Sarajevo on 17 April 1941, and the liberation of Sarajevo by the Yugoslav partisan on 15 April 1945.  The Winkelturme survived both World War II and the Siege of Sarajevo completely intact.  Monument or detritus, you decide.

The Winkelturme in Sarajevo is locked, probably having been declared unsafe for tourism.  The door is welded shut to discourage teenagers from doing urban exploration of their own.  But there is another stranger site, approximately 100 meters from the Winkelturme, on the opposite side of the same warehouse park.  This appears to the just the conical cap of a Winkleturme, sticking directly out of the dirt.  Other Winkelturmes in Germany lead to underground bunkers and military facilities.  One Winkelturme standing near the Berlin Zoo was dismantled at great expense – it took so much destructive power to destroy them that most were left standing, again, either as detritus or monuments.  So the question remains – was there a second Winkelturme in Sarajevo, acting as an additional bunker for workers at the warehouse park and train station?  If there was, who destroyed it, and why did they leave its twin standing?  We may never know.