I Was Not Born to Amuse the Tsars

HomeInterestingI Was Not Born to Amuse the Tsars
Let's Start

I Was Not Born to Amuse the Tsars

When the pre-eminent Russian poet Alexander Pushkin died on 10 February 1837, it was in a tragic echo of an incident of the life of his great-grandfather, Avram Petrovich Gannibal (also written as Hannibal).

Pushkin was killed by his brother-in-law in a duel over Pushkin’s wife Natalya, a parallel to the first marriage of Gannibal, who was also publicly cuckolded when his first wife Evdokia delivered a white daughter.  Gannibal himself was African. 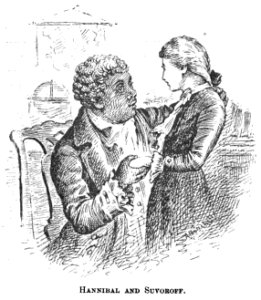 Pushkin was strongly influenced by his African heritage, often referring to the its influence on his behavior or looks.  At times he was enamored of his “otherness,” while still other times his heritage made him despair.

“Pushkin adopted a variety of stances toward his black ancestry:  at times he embraced his “exoticism” and his African “hot-bloodedness”; at other times he brooded that the traces of his African lineage that showed in his face and his hair made him “ugly”.  But there is no doubt that, whatever his attitude toward it, Pushkin’s African ancestry was a source of ongoing fascination for him.  It made him different from all other Russians; it is thought… that this difference is what enabled Pushkin to become the great chronicler of Russian life and the Russian people.  That he stood a little apart from his countrymen gave Pushkin a clear-eyed vantage point from which to view his fellow Russians.” — Henry Louis Gates, Jr    Under the Sky of My Africa

The man who would become Avram Petrovich Gannibal and the great-grandfather of Russia’s most important literary giant, was born in what is now Cameroon as the son of a minor noble of the Kotoko tribe.  When about 4 or 5 years old, he was captured by Ottomans and taken as a slave to Constantinople, where he spent one year.

Gannibal’s history from Constantinople on is a perfect illustration of precisely how seemingly incestuous the tides of history can be.

After a year in the court of Sultan Ahmed III, the child who would become Gannibal was seen by the ambassador to Constantinople from the court of Peter the Great in Russia; a man named Piotr Andreyevich Tolstoy – the great-grandfather of the most famous Russian author Leo Tolstoy.

With the help of a merchant/spy from what is now Dubrovnik named Sava Lukić Vladislavić, the child was taken to “decorate” the court of Peter the Great.  There he immediately impressed the Tsar and accompanied him as a valet for the next thirteen years.

On 13 July 1705, Peter demonstrated his delight toward the child who had been purchased as a slave by combining the child’s baptism at the St Paraskeva Church in Vilnius with a service of thanksgiving for Peter’s victory over the Swedes.  An inscription on the church reads:

In this church Emperor Peter the Great in 1705 attended a service of thanksgiving for the victory over the army of Charles XII, and presented a banner taken in battle from the Swedes.  And had baptized here the African Gannibal, grandfather of our renowned poet A.S. Pushkin.

The child, now named Avram Petrovich, accompanied Peter the Great to France one last time in 1717, where Peter left him to study in Metz along with other sons of noble Russian families.  This was a common practice with Peter, who was trying to grow a native Russian talent pool of Western-trained nobles well versed in arts, science, and warfare techniques.

During his time in France, Avram studied at the Royal Artillery Academy and joined the French Army, fighting in the War of the Quadruple Alliance.  He sustained a serious head wound and was captured by the Spanish, but upon release was able to finish his studies in France.

It was also in France where Avram acquired his surname of Gannibal, in homage to the Carthaginian General Hannibal, and made the acquaintance of great thinkers such as Voltaire, who referred to Gannibal as “the dark star of the Enlightenment.”

Gannibal returned to Russia in 1723, just in time for the death of his godfather, Peter the Great.  He managed to keep a privileged position as the tutor to the Tsarevich for two years, but when Prince Menshikov seized power Gannibal was sent into Siberian exile.  His foreign origins and foreign education made him innately suspicious to a man of dubious background (side note:  Gannibal’s great-grandson Pushkin would later take a swipe at Menshikov in one of his poems, referring to him as a “half-tsar”).

It was at this point that the man most responsible for Gannibal’s life in Russia made a reappearance. Sava Lukić Vladislavić, who was much more than a merchant advisor to Peter the Great, had retained his position of privilege at the Russian court and negotiated the Treaty of Kyahkta with the Qing Dynasty of China. Vladislavić needed a city and fortress built on the border, and who better to build it than the brilliant godson of the late Tsar.  Of course, he said in his petition to the court, the Tsar’s godson could not see to the necessary buildings from Siberian exile.

Gannibal was released and went on to shift the fortress at what is now Novoselenginsk.  He was then returned to the Baltics.  It was this series of assignments that directly led to the marriage that would produce the poet Alexander Pushkin nearly seventy years later.

Unfortunately, Gannibal’s love life would not be an easy or straight road to success.  In 1731 he first married the daughter of a Greek merchant, Evdokia Dioper.  The marriage was a disaster.  Evdokia had no desire to marry Gannibal, and indeed found him repulsive.  The two clashed frequently, and their troubles came to a head in 1732 when Evdokia delivered a white daughter – proof that she had not been faithful to her hated husband.

In response, Gannibal had her thrown into prison, where she languished for eleven years until she was allowed to enter a convent.

The scandal was too much for Gannibal, and he retired to an estate outside Tallinn, Estonia to escape the pernicious gossip of his wife’s infidelity and his own tendency to deal with Evdokia through beatings.

It didn’t take Gannibal long to find the love of his life, Kristina Regina Sioberg.  Although he was still not divorced from his first wife, Gannibal bigamously married Kristina after the birth of their first son in 1736.  The marriage would later be legitimized after Gannibal’s divorce and payment of a fine and penance.  By all accounts the two were rarely separated and showed a full devotion to each other, with an eventual 11 children as proof of the agreeableness of their match.

Gannibal came back into full favor when the Empress Elizabeth, daughter of Peter the Great, gained the throne.  In 1742 he was appointed Governor of Tallinn (then called Reval), Estonia from 1742 – 1752.

During this time he left valuable evidence of how he viewed his own roots in a 1742 petition to the Empress, “I, your humble subject, am an African by birth, born into the high nobility there.  I was born in the domain of my father, in the town of Logon; in addition my father ruled two other towns.“

The Empress was so impressed with Gannibal that she bestowed upon him a huge estate at Mikhailovskoye, along with hundreds of serfs.  It was to this estate, now a Pushkin museum,  that Gannibal would retire in 1762 after his 1759 promotion to General and receiving his second Order of Alexander Nevsky from the Empress in 1760.

Gannibal’s legacy was not limited to his engineering, administrative, or military abilities.  He also left behind a two-volume published work called, “Geometrie Practique” and “Fortification.”

Four of Gannibal and Kristina’s sons joined the military and served with distinction, with his son Ivan Abramovitch Gannibal reaching the highest ranks of the Navy and building the city of Kherson in the Crimea.  Nor did Gannibal forget those who aided him; his son Isaak was originally named Sava, after the man who brought him to Russia and was responsible for bringing him out of Siberia.

Gannibal’s daughter Sofia Abramovna Rothkirch would be responsible for the first account of his amazing life through the writing of her Swedish husband. Sofia would have yet another effect on the world’s future:  one of her direct descendants, Pyotr Wrangel, would lead the White Army against the Bolsheviks in the Russian Revolution, and then in Serbian exile found the first organization to embrace all Russian military emigres in Sremski Karlovci.

But it is Gannibal’s son Osip that is responsible for the most famous legacy of Avram Petrovich Gannibal.  Osip’s daughter Nadezhda (known as “la belle Creole”) became the mother of Russia’s most renowned poet Alexander Pushkin.

Pushkin’s greatness cannot be denied, but it would be wrong to reduce the legacy of Gannibal to the literary genius of his great-grandson.  Taken as a child and made into an Ottoman slave, then chosen to serve a notoriously mercurial Russian Tsar in a north unimaginable to a child in an African village, Gannibal soaked in every educational and societal opportunity.  He became a symbol of the Enlightenment, mastering multiple languages, publishing books, ably administering Russian lands, and ending his long life on a vast rich estate with serfs to care for his every need.  He did this all as an obvious outsider in a nation that was just being pulled out of its traditional insularity and had not been known for its kindness to outsiders.

Pushkin was great.  But certainly he inherited a tendency to greatness from his  African great-grandfather.