When Enver Hoxha proclaimed The People’s Republic of Albania on 11 January 1946, no one was quite sure how the man had gotten himself into such a position.

Hoxha was a communist, and he had fought as a Partisan during World War II.  By March 1943, the former French teacher had been formally elected First Secretary of Albania’s Communist Party, but he certainly hadn’t been born into that role.  Although his uncle had been quite the agitator in his day, Hoxha’s father was a Muslim merchant.

Indeed, although it is hard to come by official records of much of the behind-the-scenes of Hoxha’s Albania, in true Balkan fashion there are rumors about almost all of it.  One of the rumors that may be more likely than most is that Hoxha was brought to power by the Yugoslav Partizans operating in Albania; Miladin Popović and Dušan Mugoša.

Popović and Mugoša were certainly sent to Albania from Kosovo in order to unite the Communist groups there – and they were successful.  Photographs show them both posing with Hoxha as well.

Whether or not Tito’s Partizans were fully behind the installation of Hoxha remains without proof, but Hoxha’s later actions showed a man who felt no indebtedness to the Yugoslavs for any past favors.

Hoxha inherited an Albania with dismal prospects post-war.  Malaria was rampant, less than 30% of the population was literate, and the blood feud and Code of Leke kept the population operating in a rigid system allowing for no opportunities for women. He was also fighting off Yugoslavia’s Marshal Tito, whose solution to a “Greater Albania” that included Kosovo was agitation for Albania to become a part of  the Yugoslav state.

Perhaps the dispute with Yugoslavia had something to do with Hoxha’s near slavish devotion to Josef Stalin.  It was not long after the end of the second world war when the Tito-Stalin Split caused enormous upheaval in the socialist world, and Hoxha found his chance to side unequivocally with Stalin’s Soviet Union. His choice allowed him to nurture a life-long enmity for Tito, taking every chance presented to render a verbal dig or create various issues for the Yugoslav state.

From a foreign policy perspective, Hoxha’s devotion to Stalin proved quite lucrative.  From 1948 to 1960, Albania received the equivalent of $200 million in aid from the USSR.  The Soviets sent advisors and built a submarine base on the Albanian coast.  For both the Soviets and the Albanians, the alliance proved to keep Tito’s Yugoslavia on guard and playing within the rules.  Unfortunately, the golden days of the Soviet-Albanian alliance were not to last, and although there were dramatic gasps uttered for several years, the end of the alliance was a foregone conclusion with Stalin’s death in 1953.

In fact, Stalin’s death was observed in Albania with more wailing, rending of garments, and gnashing of teeth than in the Soviet Union itself; the fourteen day period of mourning in Albania was sacrosanct and longer than than anywhere else.

Hoxha was horrified by Khrushchev’s post-Stalin actions.  The Secret Speech shocked and appalled him.  The rapprochement with Yugoslavia sent him into a fury, especially as the Soviets encouraged Hoxha to rehabilitate certain Albanian politicians. The Soviets were also attempting to implement plans for the entire socialist world to integrate, plans which called for Albania to drop its modernization activities and focus on raising oranges and exporting raw mining materials.  Arguments between the Soviet leader and Hoxha came often and with increasing vitriol, although they were largely kept secret from the world at large until 1961.

In one exchange, Khrushchev reportedly told Hoxha, “You are just like Stalin who killed people!”

Hoxha replied, “Stalin killed traitors, and we kill them, too.”

Hoxha used this time to raise his profile with the Chinese, whose relationship with the USSR was also deteriorating.  As Soviet aid to Albania dropped, the Chinese began to pick up some of the slack.

In July 1960, the Albanians discovered a plot to overthrow their government, and for the next year the relations between the USSR and Albania spiraled further downward. It culminated in a speech given by Hoxha on 7 November 1961, where he referred to Khrushchev as “a revisionist, anti-Marxist, and defeatist…” He then referred to Stalin as the last real Communist leader of the Soviet Union and stressed Albanian independence.

Within the week all the Warsaw Pact nations had broken ties with Albania, although Albania had been a founding member of the organization.  Taken in concert with the Sino-Soviet Split, the Soviet-Albanian Split received much less international attention, although it would last until 1990.

Foreign policy was not Enver Hoxha’s only focus, however.  Within his small nation, he was conducting regular purges to eliminate anti-communists, and, later, any competition.

Believing religion to be a dividing factor in the multi-religious nation, Hoxha began taking steps against it in 1945 with his Agrarian Reform Laws.  The laws transferred land from large landholders to peasants, and affected the Catholic Church heavily.  This was quickly followed by banning Jesuits and then Franciscans.

Schools focused on teaching atheism, and activities such as bringing forbidden food to schools and workplaces on holy days, while taunting those who refused to eat the items became powerful tools in breaking religious bonds.  Religiously based names were banned, being replaced by names deemed Illyrian.  Beards were banned due to their association with Islam and the Orthodox Church.

Finally, on 6 February 1967, Hoxha gave a speech condemning all religion and exhorting the population in the fight against this “opiate of the masses.” As a result, all 2,169 churches and mosques in the country were either destroyed or repurposed, and all clerics were declared outlaws. 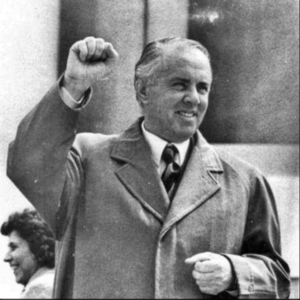 By the adoption of the next constitution in 1976, Hoxha declared Albania the first atheist nation in the world, and the position was reflected officially in the new document, “The state recognizes no religion and supports and develops atheist propaganda to engage people in the materialistic scientific worldview.”  Or, stated more succinctly by Hoxha himself, “The only religion of Albania is Albanianism.”

Hoxha attacked the low literacy rates with the same ferocity he directed at religion.  In 1930 literacy in Albania was only at 10%.  By 1950 it had reached 70%.  Within this push he established the University of Tirana in 1957.

He also focused on the rights of women, stating, “The entire party and country should hurl into the fire and break the neck of anyone who dared trample underfoot the sacred edict of the party on the defense of women’s rights.”  Women, of whom only 4% had been engaged in the economy in 1938, were encouraged to join the Partisans during the war as a start on the ladder to full engagement.  By 1982 48% of women were participating.  Liri Gega, the sole female among the founders of the Communist Party of Albania, was not only active in Albanian politics, but treated the same as any man accused of being a Titoist in 1956 – she was executed.

Hoxha clung fiercely to his Stalinist proclivities, and his developing cult of personality mirrored that of the Soviet leader.  Students studied collections of Hoxha’s quotes, he was given fancy titles like “Supreme Comrade”. Those who flew too close to the heights of his power were purged – only one of the founders of the Albanian Communist Party managed to die at home in their bed. He erected nearly 200,000 concrete bunkers throughout the country to protect from possible invasions. In order to keep the people of his impoverished nation in line, he banned all foreign travel in 1968, and used the Sigurimi (secret police) so extensively that 1/3 of all Albanians had been either interrogated or put in labor camps.

Nor was Hoxha’s commitment to an ongoing relationship with China to last.  Quick to ally with the Asian nation after the Sino-Soviet Split, Albania led the movement to have the People’s Republic of China given the Chinese seat on the Security Council at the UN in 1971.  But with Nixon’s visit to Beijing, the relationship began to deteriorate.  Hoxha struck out in writing and speeches, as per his usual, and China responded by warning the dictator that Albania could not always depend on Chinese aid.  on 7 September 1977, with Yugoslavia’s Tito visiting the Chinese capital, Hoxha claimed that China had become a revisionist state and that Albania was the last true Marxist-Leninist state on Earth. on 13 July 1978 China cut ties with Albania, and from that point on the small European nation was on its own.

Hoxha had suffered a heart attack in 1973 and never fully recovered.  As a result of this, he began to isolate himself more and more in a segregated section of Tirana called Blloku, where party officials had all the luxuries banned in the rest of Albania.  As his health declined, his wife Nexhmije took over more government responsibilities.  Hoxha still had one more major purge to execute, however, in 1981.  Whether Mehmet Shehu committed suicide as officially stated, or was killed by Hoxha himself to resolve an argument as is still rumored today, the entire incident was set in motion when Shehu’s son fell in love with a volleyball player who happened to have anti-communist relatives outside of Albania.  Shehu, who had been the heir to Hoxha’s power up to that point, was accused officially of having been a spy for the United States, Yugoslavia, and the Soviet Union.  His entire clan was then arrested, with Shehu’s wife dying in prison.  Although there are photos of Shehu’s dead body, his actual burial place was not discovered until 19 November 2001.

A farcical assassination attempt in 1982 went nowhere, but Hoxha’s body would not listen to his demands as well as the Albanian people.  On 11 April 1985, after a series of heart attacks and strokes, Enver Hoxha died.

He left behind an Albania that was the third poorest country in the world, but had no foreign debt.  It was a country that had made huge strides in achieving literacy amongst the population, but had over 200,000 informants on the books of the Sigurimi.  Albania had no foreign allies, and 64% of its coastline was declared a military zone.

History has not been kind to Hoxha’s legacy, although his wife fought hard to protect his name before her death in February 2020. His statues were pulled down, his pyramid shaped paean to Hoxhaist history is now a bus station.  His sons have twice been kicked out of their accommodations in Albania by the government, and it has all passed with just a whisper about the man who exerted total control over Albania for nearly forty years.