In 1907 Kristaq Dishnica died in the United States state of Massachusetts and was buried.  His body was placed in the ground, but he was not allowed a religious funeral or a blessing of the gravesite, and the consequences of this act would set in motion events that would entirely change the future of Albania – a country 4,500 miles away as the crow flies and one that most Americans probably did not even know existed.

Albanian Orthodox adherents of the time were ministered through by the Greek Orthodox Church, and this was proving to be a sticking point.  Albanian Nationalism was gaining tremendous momentum in Albania and abroad, and this threatened the primacy of the Greek Orthodox Church.  Under those circumstances many priests of the diaspora refused to bury Albanians suspected of nationalist activism.  This was the case with Kristaq Dishnica.

The 25-year-old Theophan (Fan) Noli was already involved in the nationalist movement for Albanian independence, and he firmly believed that the Orthodox believers in Albania should have their own church with services in their own language.  Convening meetings with the Albanian diaspora in the United states, the decision was made to establish a separate Albanian Orthodox Church.   The Russian Archbishop Platon (Rozhdestvensky) agreed to ordain Noli into the priesthood on 18 March 1908. With this, the independent Albanian Orthodox Church was born in the United States.

Noli fully supported an Albanian liturgy, and translated the bible into Albanian.  He was uniquely suited for this work, as he was fluent in Albanian, Greek, and English – as well as French, Turkish, and Arabic.

At the same time that he was agitating for Albanian independence, he was busy studying for his BA degree at Harvard.  These two activities bore fruit at nearly the same time – his BA degree at Harvard was granted in 1912.  And on 28 April 1912 Vatra, the association of Albanian Americans created to agitate for Albanian causes, originally called Besa-Besen, was officially founded.

Vatra would serve as an Albanian government-in-exile during the First World War. It also received the support of such notable personalities as Woodrow Wilson and Theodore Roosevelt.  And the agitation of Vatra on a world stage worked – in 1920 Albania was granted membership in the League of Nations, an international recognition that had eluded the Balkan nation since 1912. Fan Noli, who had left Albania quite young, returned to the nation of his birth in 1921 as a Member of Parliament with the liberal People’s Party.

Almost immediately he found himself in direct conflict with the more conservative Ahmet Zogu.

The infighting in the government continued as Noli and other Orthodox adherents moved forward to assure the independence of the Albanian Orthodox Church rather than remaining under the control of  Constantinople. The Congress of Berat on 13 September 1922 ended with Fan Noli becoming the Primate of all Albania, as well as guaranteeing that services would be held in the Albanian language.

On 23 February 1924 the issues between those in the Albanian Parliament siding with Zogu and the more liberal coalition of Fan Noli came to a head when Beqir Valteri shot Zogu twice.  To everyone’s shock, Zogu returned to work, but the damage was still unfolding.  As revenge, one of Zogu’s party members shot and killed the liberal Avni Rustemi in April.  Fan Noli gave an inspiring speech at Rustemi’s burial, and by June 1924 Zogu and his supporters fled Albania for exile in Jugoslavia.

Following Zogu’s flight, Noli was named the Prime Minister on 17 July 1924.  It was a short -lived government: although Noli tried to implement reforms in agriculture that would lead to modernization, but the program was wildly unpopular.  On 24 December 1924 Ahmet Zogu returned at the head of the White Army of General Wrangel, and Fan Noli fled to Italy, and later back to the United States.  His antagonistic relationship with the man who would be crowned King Zog and ejected from Albania in turn remained for the most part, although Zogu did pay for Noli’s medical treatment in 1933.

The Albanian Orthodox Church was finally recognized by the Ecumenical Patriarch of Constantinople in 1937, and Fan Noli continued in the church as an archbishop.  He translated multiple classical works, such as Shakespeare, Cervantes, and Edgar Allen Poe into Albanian.  He also translated Albanian Orthodox documents into English.  In a lifetime of continuing education, he earned a second BA from the New England Conservatory of Music and a Doctorate from Boston University. 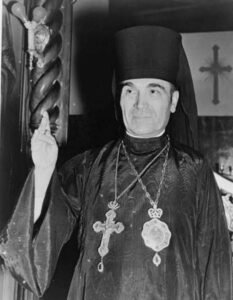 Most controversially, Noli agitated with the United States Government to recognize the communist government of Albania under the dictator Enver Hoxha.  It was this path of action that earned Noli the title “The Red Bishop” and accusations of sentimentality toward communism.

Fan Noli died in 1965, four years after King Zog.  Both of them died in exile outside Albania, Zog in France and Noli in the United States.  Although they had different ideas of the paths to modernity and prosperity, both promoted feelings of pride and duty to an independent nation of Albania.

“One can have any religion he has found from his ancestors and likes, but he cannot choose another nationality and fight his own without putting  a big stamp of “traitor” on his forehead,” Fan Noli.

For more about the culture and history of Albania, please follow this link.