The Most Beautiful Unhappy Queen 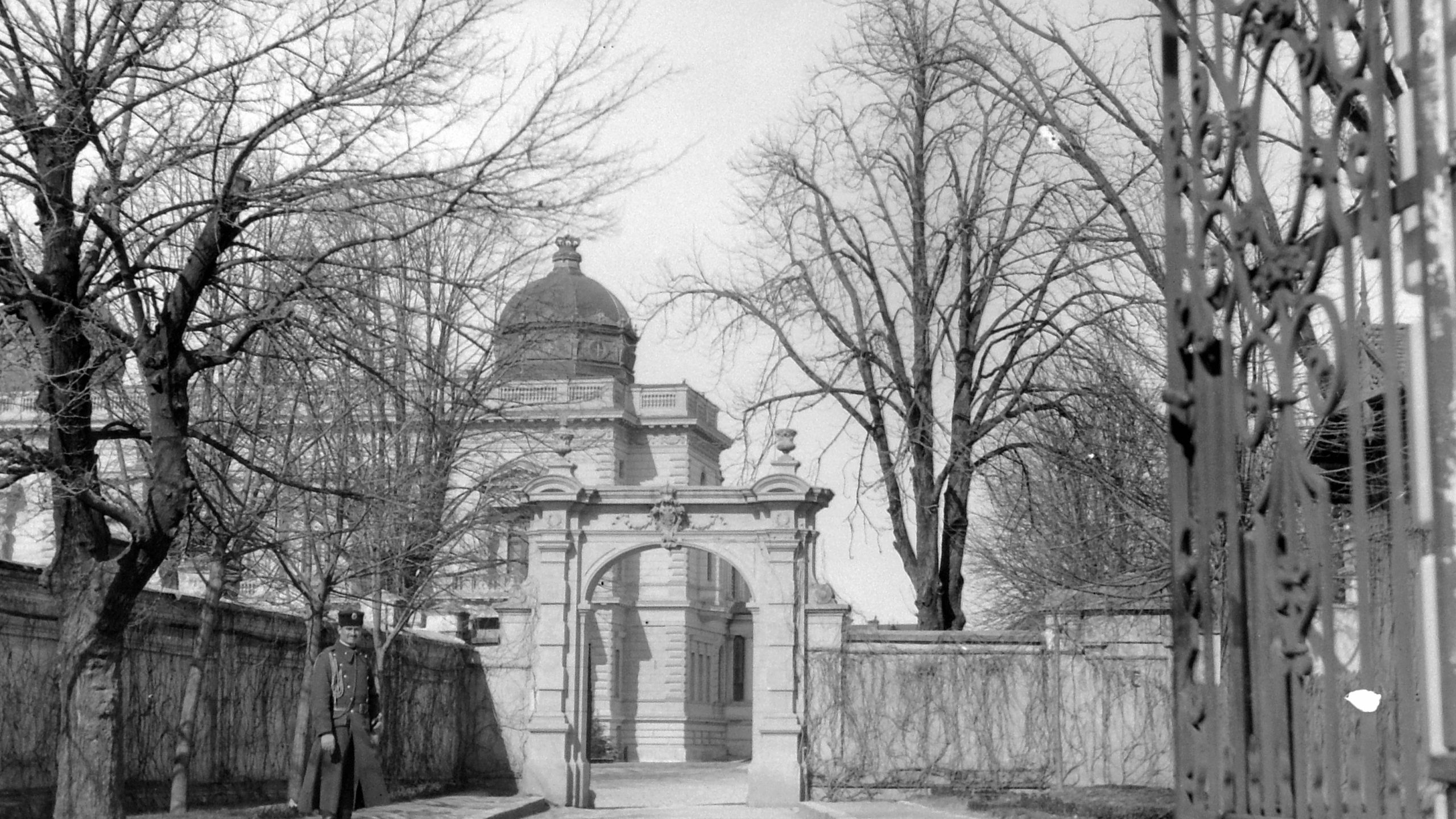 The Most Beautiful Unhappy Queen

There is a story about the Serbian Queen Natalija Obrenović – that one day in her girlhood she was playing by herself in the woods when she happened upon an old, old lady in her path.  Natalija wasn’t afraid – she was rarely afraid of anything.  She was very curious, though, and approached the old woman who seemed to be so far from any place and within a comfortable walk for the elderly.

“Let me see your hand, my beautiful dear!” the old woman said to her.

Natalija didn’t see any harm in that, and so she gave the old woman her hand.

“Oh, child.  You will be the most beautiful queen in the world!” the old woman said.  “But also the most unhappy.”

“But being beautiful makes me happy!” said Natalija.  “How could both of those things be true?”

“Nevertheless, my child, they are,” the old woman said. “I wish I could grant you happiness.”

Natalija, who was a loving child as well as beautiful, thanked the old crone for her prediction and continued home.  She could not believe that any unhappiness awaited her.

When Natalija turned sixteen, her future seemed even brighter.  She met the handsome Prince Milan of Serbia, who wanted Natalija for his own as soon as he set eyes upon her.  Certainly no girl, and certainly not Natalija, would turn down a chance to be a queen!  So on 7 October 1875, Milan and Natalija were married.

By all accounts she loved him deeply.  And the people of Serbia were ecstatic to have such a beautiful young queen-to-be, and even more happy when she was pregnant within the year and gave birth to Prince Alexander.  Natalija seemed perfect.

But, and here we enter the world of stories again, Natalija noticed that her husband was no longer treating her so attentively.  He wasn’t spending time with her or giving her loving glances and beautiful gifts. And worst of all, he was forbidding Natalija from one of her favorite activities – exploring.  She desperately wanted to explore the area around Topčider as she had explored the forests in her youth, having been told that the surrounding woods were very interesting.  Natalija was still young, and ghost stories were very intriguing. But Milan forbade her from this exploration even as he was paying less and less attention to her.

Until one day Natalija decided that she was going to make her own decisions, and she begged her coachman to take her exploring.  The beautiful Natalija was difficult to deny, and the coachman agreed to take her to Topčider.

The woods were as creepy as Natalija had been told, and she was enjoying them very much.  Then the coach turned a corner and Natalija started to see that they were not alone – someone else was among the trees! Two someones!

Natalija’s heart stopped. One of the someone’s was her husband, Milan.  And he was embracing another woman.

The story is told that Milan flew into a rage when he saw her, and that the coachman had to keep him from physically assaulting Natalija, who was in hysterics.  The stories don’t say when or how she managed to get home, but stories aren’t needed to know that by 1880 the Obrenović marriage was in shambles.  Milan no longer bothered to hide his numerous affairs, and he was not above striking Natalija if she argued too long or hard.  Natalija got physical as well; when she had to greet the wife of the Greek ambassador at an Easter function, knowing that the woman and Milan had been having an affair, she slapped the ambassador’s wife across the face in the reception line.

But there wasn’t only trouble with infidelity in the Obrenović marriage; Milan looked to Austria-Hungary for support in Serbia, but the Russian Natalija was an extreme Slavophile.  She had even chosen the Russian Tsar Nicholas II as Prince Alexander’s godfather. As 1885 approached, Serbia and Bulgaria entered into a proxy war with Russia supporting Bulgaria and the Austro-Hungarians backing the Serbs.  Natalija was furious, and more than a bit smug when Serbia was defeated.  Milan was losing the support of his people, and Natalija couldn’t resist poking that wound. Milan responded as he usually did – in a temper and with violence.  Little Alexander was witnessing it all.

Unfortunately for Natalija, Milan was able to convince Kaiser Wilhelm to rip Alexander from Natalija’s arms and deliver him back to Serbia.  Natalija herself was not welcome back and was not allowed to visit her son.

She began to travel, and on 28 October 1888 a small blurb appeared in the New York Times:

divorce by her husband.  It was brought to her by special messenger, and the

decree will therefore be conveyed to her through the Foreign Office.

The Serbian Orthodox Church had approved of the Obrenović divorce, without Natalija’s agreement.  She refused to accept it, but there wasn’t much she could do in reality except bide her time.

She didn’t have much time to pass, though, because in 1889 King Milan was forced to abdicate in favor of the prince and renounce his Serbian citizenship.  Milan was leaving the country, and Natalija was headed back to her son in Serbia.

Natalija, ever enamored of Russia, tried to move her son’s head and rule East.  She spent over a year trying to influence her son as Milan watched from outside the country, getting more and more angry.  He had to act.  In 1891, using the little influence he had left, Milan managed to get Natalija banned from Serbia.  She laughed and refused to leave, but Milan was resolute.  Serbian police were sent to the palace to escort her out of the country.  Natalija managed to open her window as they attempted to seize her and scream for help.  Ever beloved by the Serbian people, they stormed the palace and came to her aid. The police were forced to retreat.

But only for one day  – the next day  the entire military garrison arrived at the palace, and Natalija had no choice but to go with them.

It took six years for Natalija to return to Serbia, and was only able to come back because she and Milan reconciled and asked the Serbian Church to vacate their divorce decree in 1893. Their marriage wasn’t healed, or even really a marriage, but they both recognized that Alexander was unable to rule on his own.  An uneasy truce developed between the two.

At the same time, King Alexander was falling in love with a completely inappropriate match, and one of Natalija’s ladies-in-waiting, Draga Mašlin. Draga was 12 years older than Alexander, a widow under the shadow of suspicion for her former husband’s death, rumored to be sterile, and had an extensive sexual past.  She was well-educated, but not of any nobility.  And worst of all – her father had died in a lunatic asylum and her mother had died of alcoholism.

For once Milan and Natalija were united.  Alexander could not marry that woman. Milan raged and threatened.  Natalija begged, pleaded, and sent letters outlining the rumors swirling around Draga.  Alexander banned them both from Serbia.

The banishment saved Natalija from witnessing the extremely violent murder of her son and his wife, and the installation of Petar of the rival Karađorđević family, in 1903.

Natalija quietly distributed the Obrenović inheritance to the University of Belgrade and various Serbian churches and monasteries.  Although she lived until 1941, she never visited Serbia again.

She was still mentioned in the press, however.

A December 1929 article in the New York Times had the following information: an elderly Sister of Mercy from a nearby convent had remonstrated with a local cabdriver for whipping his horse mercilessly.  The cab driver responded by whipping the poor nun across the face.  An enterprising reporter from a Budapest newspaper found the situation intriguing, and with a little bit of digging was able to discover that the elderly nun was, in fact, the former Queen Natalija of Serbia.  After a life of tragedy she had converted to Catholicism and retired to a convent in Paris.

And it was there, on 19 May 1941 that she died. Time Magazine still found her notable enough to issue a (not fully truthful) obituary:

Died.  Ex-Queen Natalie of Serbia, 82; in the convent of Notre-Dame-de-Sion in Paris.  Daughter of a Russian colonel and a Rumanian princess, she married Prince Milan of Serbia at 16, bore Prince Alexander at 17, became queen at 23.  The dissipations and amours of her husband drove her to flee the country with Alexander, whom Milan soon kidnapped.  Then Milan set Alexander on the throne at 13, retired to Paris, and died in 1901.  Natalie retired to Belgrade after her son married Draga Mašin, widow of an engineer, whom it was supposed Draga had poisoned.  Officers led by Mašin’s brother killed the royal couple in their bed and hurled their bodies out the window June 10, 1903.  Legend has it Natalie watched from the garden. She fled to France, entered the convent where she died last week; an obese, forgotten woman who had spent her old age knitting for the poor.  Of death she had once written, “It will be…the beginning of my happiness