And the Walls Came Tumbling Down 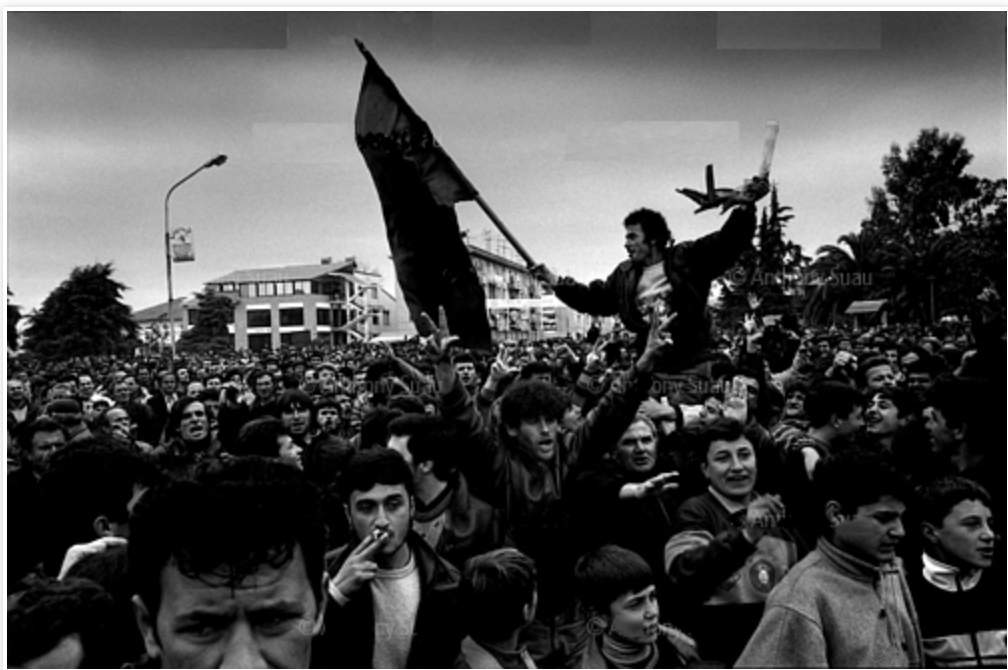 And the Walls Came Tumbling Down

Enver Hoxha died on 11 April 1985.  It was the end of more than an era.  Hoxha had ruled Albania with an iron fist since 1944.  More Stalinist than Stalin, Albania’s allies had all fallen away at various times in his rule; since the Sino-Albanian Split in 1978 Hoxha’s nation had been completely alone.

Foreigners were not allowed into Albania, and very few Albanians were allowed out.  History as Albanians knew it was not the history as it had happened; Hoxha wrote 71 books during his lifetime (13 were memoirs), nearly all of which concerned themselves with Hoxha’s approved version of history.  Since foreigners and foreign media were banned, there was no way for the average Albanian to even have a hint of anything that countered Hoxha’s version of events.

When Hoxha died, he was succeeded by Ramiz Alia (his earlier heir apparent, Mehmet Shehu, had been shot during an argument with Hoxha.  His death was declared a suicide from his pain at having betrayed Albania to the West).  Alia, seeing the coming disintegration of the Soviet Bloc, began to introduce limited reforms and cautiously open to the West, but he wasn’t trying too hard.  As the 1989 revolutions rocked Eastern Europe, most Albanians didn’t even know they were taking place.  Alia, though, was shaken to his core by the fate of Romania’s Nicolae Ceausescu, murdered with his wife after a show trial on Christmas Day.

Albanians were making their feelings about communism known, with protests in Shkodra attempting to demolish the statue of Stalin.

More reforms were introduced, including the signing of the Helsinki Accords on human rights – making Albania the last European nation to sign onto the treaty.  But as in many of the other former communist states, it was too little, too late.

On 17 September 1990, cardiologist and politician Sali Ram Berisha condemned Alia’s “cosmetic reforms” and demanded political pluralism.  National sentiment continued to rise, and on 9 December 1990 it erupted on the campus of Enver Hoxha University.

Members of the Democratic Party demonstrated, wearing white coats, to demand reform.  Numbering in the thousands, they were joined by Berisha, still officially a member of Alia’s Party of Labor.  Alia caved into demand and announced that the Labor Party was giving up its absolute right to head the government.

When Albania’s first pluralist elections since World War II were held on 31 March 1991, Alia’s Labor Party managed to win.  The victory did not last.  Within months general strikes paralyzed the new government.  A committee of “national salvation” next attempted to steer Albania away from the shoals, but it collapsed as well.

The transition of the most isolated and undeveloped country in Europe into democracy from Hoxhaism was not as smooth as it initially seemed.  The system was simply not set up for many Western issues, especially those in the financial sector.  The population was not familiar with the workings of a capitalist financial market, and there were few private banks.  The three state-run banks were woefully behind on legislation to regulate financial transactions, and a downward spiral quickly began.

Although the state-run banks, which held 90% of Albanian deposits, had a positive interest program, they also had a portfolio of bad loans.  The tightening of credit in order to deal with the bad loans caused the Albanian public to look to the unregulated informal credit market.  Some attempts were made to bring the informal market under control, but players in the informal credit market were paying off Albanian politicians, who did not want to kill their cash cow.  The creditors were allowed to continue with few regulations or restrictions.

A series of ponzi schemes, where the money of new investors was used to pay old investors what looked on the surface to be an outstanding dividend, also entered the market.  The returns, up to 25% in some cases, galvanized the public.  More than 2/3 of the population was invested in approximately 25 firms.  Albanians were selling their houses to gain money to invest, and farmers were selling off livestock.  The International Monetary Fund issued a warning to the Albanian government, but with many in the government also invested in the ponzi schemes, the warning was not passed on to Albanian citizens.  To further muddy the waters, some of the ponzi schemes were also involved in actual business, although much of that was smuggling into Yugoslavia in violation of United Nations sanctions.  When the sanctions were lifted following the signing of the Dayton Accords, the pyramid scheme began to collapse.  Albanians would lose more than 1.2 billion US dollars.

The investment firms began to fall on 19 November 1996.  By January 1997, Albania was fully in upheaval.  To add to the chaos of a population who lost nearly everything in the pyramid scheme collapse, rivalries between the north and the south of the country (between the Gheg and Tosk) also began to surface.  On 28 February, anti-government rioters attacked the SHIK building (the home of the national intelligence service).  The building was set on fire, and in the course of the attack three police officers burned to death, three were killed by the crowd, and three civilians were killed.

Albanians reeled at this news.  The newly democratic nation had collapsed.

On 2 March 1997, the Albanian government declared a state of emergency, although it did little good.  As police officers came under attack in cities across the nation, many in the army and police force deserted.  Weapons armories were broken into, and at one point it was reported that every male above the age of 10 in the south had at least one rifle and “ample” ammunition.  These looted weapons would later make their way across the border into Kosovo and into the hands of the Kosovo Liberation Army.

The government was forced to resign and an interim government took over, with no more success than the government it replaced.  A snap election was set for June, but  customs and tax offices continued to burn.  Albanians, particularly young men, snuck across the border – looking for opportunities in Italy and Greece.

It was the tide of refugees that galvanized Europe into action.  On 28 March 1997, the Italian Navy attempted to board the Albanian ship Kateri i Radës and in the process rammed into it.  Carrying refugees, the ship quickly sank.  At least 84 Albanians, the youngest three months old, died in the accident.

The United Nations saw no option but intervention, and Operation Alba (led by Italy) began 15 April 1997 and order was quickly restored in Tirana. Although the majority of the 7000 troops involved were Italian, several other European countries participated as well, mainly to collect the looted weapons that had permeated the countryside and apprehend the criminals who had taken advantage of the chaos.

Operation Alba was a success.  By 12 August the troops involved were withdrawn, as the new government elected on 29 June came to power and Albania received a do-over.

Unlike much of Eastern Europe, Albania’s collapse wasn’t immediately on the heels of the transition from communism to capitalism.  The most isolated European country during the rule of Enver Hoxha, it had also been the most repressive.  It wasn’t until the new trend of capitalism proved to have a dishonest local face that Albanians fully revolted.  Unlike other Balkan nations, however, the unrest was short-lived.  In less than a year, with the help of a United Nations peacekeeping force, the nation was attempting to move on from the 1997 crisis.