Very rarely is a shooting war in the Balkans about the subject which everyone claims was the Cassius Belli.  Sometimes it is about a political slight related the the topic, but usually it’s about money.  The same is true of economic wars.  The Great European Imperial Spheres of Influence criss-crossed the Balkans, and frequently collided there. 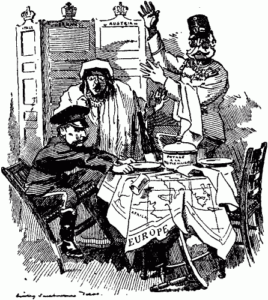 After independence in 1878, Serbia, the only  Balkan Kingdom at the time, was ruled by the kings of the Obrenović dynasty, who were very close to the Austro-Hungarian government.  The Serbian economy was tied to the economy of Austria-Hungary, with integration in banking, transportation, and most importantly, in defense.  National defense is a necessity in any country, but it also an industry, and the Serbian government bought a great deal of arms from the Austro-Hungarian arms manufacturers, making the Austro-Hungarians very rich indeed.

In the May 1903 coup, Serbian military officers, with banking from the Russian secret police, and later Russia’s French allies, killed Alexander Obrenović, and replaced him with King Peter from the rival Karadorđević Dynasty.  King Peter owed the Russian government a great debt – without their intervention, he could never have taken the throne.  The fastest and easiest way to pay the Russian government back, was to push some business away from the Austro-Hungarians, who were Russia’s rivals, to the French, who were Russia’s allies.  And King Peter chose the arms industry, which was the fastest to change and the most lucrative order for the sellers.

The Serbian Army purchased cannons manufactured by the French Schneider et Cie company.  They were Canet Guns, which were a series of weapon systems and developed by French Engineer Gustave Canet several other types of guns made by the company. 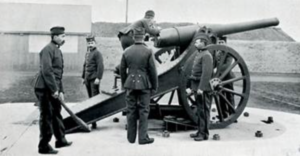 The Serbs also purchased a number of De Bange Field Guns.  Colonel Charles Ragon de Bange was a pioneer in artillery, and developed the first Obturator Ring or “O Ring”.  The O Ring is made of a soft material which expands under pressure, forming a seal.  Modern readers will recognize the failure of an O-Ring as the cause of the Space Shuttle Challenger crash.

By the start of World War I, the Serbian Army was equipped with a combination of the following Quick Firing (QF) and Slow Firing (SF) Cannons.  Introduced in the 1880’s and 1890’s, QF cannons were breach loaded, used cased ammunition, had buffers to reduce recoil, and used the new nitrocellulose smokeless powder to prevent a puff of smoke that obscured the gunners view.  The older, SF cannons were also still in use, but were being slowly phased out.

The French Arms industry benefitted financially from the Serbian alignment with Russia.  This, combined with the restive Bosnian Serb population still under Austro-Hungarian rule, intelligence agents, spies, terrorists, the web alliances in the early 1900’s, and a variety of other factors led the world toward inevitable collision in WWI.

For more about the lead up to World War I and the war itself, please click here.