Memoirs of a Former Janissary 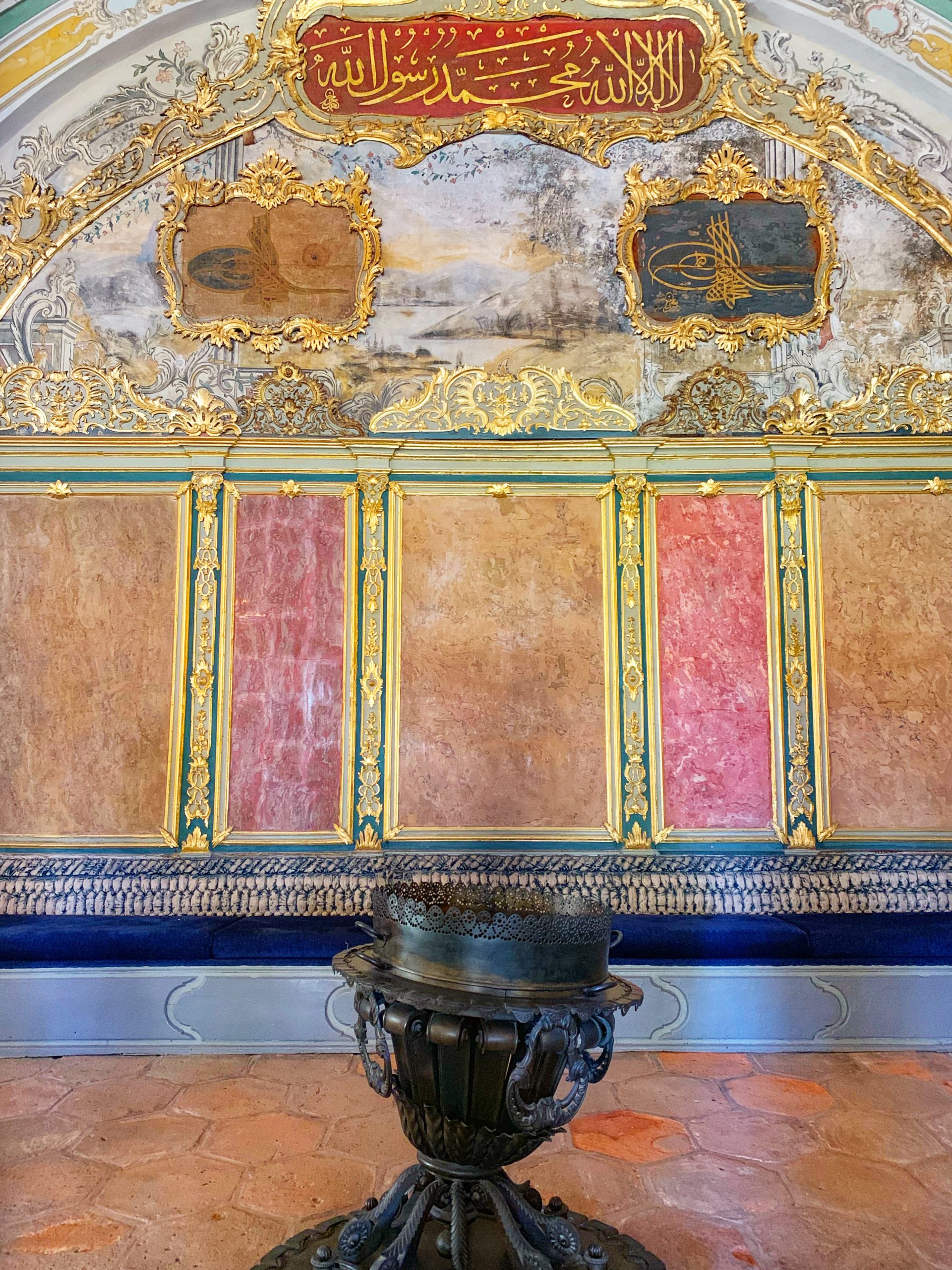 Memoirs of a Former Janissary

In 1455 the Ottomans approached the fortress at Novo Brdo in Serbia, the last city to remain standing during the first invasion of the Turks.  The Christians inside the fortress managed to hold on for forty days, but on June 1, they could delay it no longer.  Knowing the price of surrender, it was still their only hope. 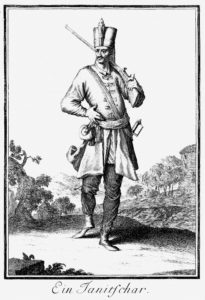 Standing outside a small gate into the city, the Sultan watched as the inhabitants were paraded past him one by one.  Women and girls were sent to one side of the road, men and boys to the other.  When this initial sorting was done, the Sultan gave 700 girls and women to his men.  He had any men of importance or rank beheaded.  And the Ottoman army left Novo Brdo with 320 boys who were destined for the ranks of the Janissaries.

Konstantin Mihailović, along with his two brothers, was among the group of boys saved to become the Sultan’s fighting slaves.

This is one of the rare facts we have about Mihailović’s personal history. While he relays a great deal of first hand reports about crucial historical events and quite a lot of information about Ottoman military and bureaucratic structure, he keeps his personal information close.  It’s a great loss, as his book Memoirs of a Janissary is one of the few first hand accounts we have of a Janissary who reached a fairly high rank and then returned to Christianity.

Of course, there are a lot of reasons to be reticent about personal facts, in the medieval world of the Ottoman conquests, religion was a person’s defining characteristic.  Mihailović was a Janissary – he would have been circumcized and converted to Islam.  He would have had to practice Islam as well, or he would not have been promoted or allowed any responsibility.  While in the Ottoman world, his religion would have had to be above suspicion.

And yet, upon his return to the Christian world in 1463, such an admission would have immediately branded him an apostate and a traitor to the Christian faith.  There was no coming back from that act, and it was punishable by death.

It would have been in Mihailović’s best interest to gloss over any details about his religious status as a Janissary.

But it would have been fairly easy to keep his inner devotion to his original religion a secret as well, as long as he kept up outward appearances while in the Ottoman court.  The Janissaries and other court officials had been collected from the Balkans in the Devshirme as well.  As another Janissary-who-returned-to-Christendom, George of Hungary, said, “The whole court and the greater part of the magnates is that nation.” Apparently, Slavic dialects were spoken more commonly in some palace areas than Turkish.

The whole of Mihailović’s book is devoted to trying to exhort Christians to come unify and change their tactics to those most likely to defeat the Ottoman advance, and there is quite a lot of derogatory language (usually using the word “heathens” to describe them). He does admit to good points within the empire and within Islam, however.

whether Christians or Jews, and to all who are under them.

Mihailović was also openly admiring of the Ottoman bureaucracy and military command structure in his book.

Mihailović provides a unique insight into several momentous historic events.  Present during the battles with the Romanian Voivode Vlad III of Wallachia (also known to history as Dracula), Mihailović provides a first-hand confirmation of Vlad’s use of impalement on his enemies, as well as providing the additional detail that the Romanian Voivode would cut the noses off the dead Turks and send them back to Hungary so that people could see how many enemy soldiers he had killed.

Vlad was a formidable opponent for the Turks, who were absolutely terrified every night at camp.

We were always on the look out for them, and every night surrounded ourselves with stakes.  Despite this we couldn’t always protect ourselves, for striking us in the night they beat and killed men, horses, and camels and cut down tents so that they killed several thousand Turks and did the emperor great harm. And other Turks fleeing before them toward the Janissaries were also beat back and killed so as not to be trampled by them.

It is interesting that Mihailović doesn’t make reference to the fact that Vlad himself had been held hostage by the Ottomans in his youth, and that this gave him a great advantage in battle, as he had an understanding of Turkish tactics – the same understanding that Mihailović was trying to impart to the rulers of Christian Europe.  He did not, however, and as it turned out the Future Dracula was soon seized and imprisoned for fourteen years by his allies.

The Ottoman Empire was now ready to fully conquer the Balkans, and Konstantin Mihailović was fighting with them.

Sultan Mehmed II advanced and in 1463 began the siege of Jajce.  The Bosnian King, Stefan Tomas, had run at word of the Ottomans, but was discovered by chance when a local man informed the army that the king had hidden himself in the fortress at Ključ.

As reported by Mihailović and others, the commander Mahmud Pasha agreed to spare the last Bosnian King’s life if he surrendered.  The Sultan overrode this order and the last Bosnian king was beheaded and unceremoniously buried.  Mihailović used this incident in his book to show the Ottoman dishonestly during war.

Although historians disagree as to Mihailović’s rank and position within the Janissaries – a detail he never gives – he must have achieved a fairly high rank.  He was next sent to a strategic fortress at Zvečaj with command of fifty Janissaries, thirty Turkish soldiers, and enough coin to pay them for six months. Considering that many other large fortresses had only ten Janissaries, Mihailović must have been very trusted indeed.

That trust turned out to be misplaced, as when Zvečaj soon fell to the forces of Matthias Corvinas, Mihailović revealed himself to be an ethnic Serb Christian who had been forcibly abducted by the Ottomans and was allowed to return to his former Christian life.

Mihailović’s book was written sometime between 1490 and 1501, most likely in Serbo-Croatian.  No original copies survive, but one written in Czech and one in Polish are available and have been studied extensively.  Unfortunately, no further clues to Mihailović’s early life or even his later life have been found.  It was obvious that he was trying to push other Christians to unite and fight against the Ottomans, and he gave them information on the weaknesses of the Turkish army in order to do so.

But another question remains – if Mihailović was brought back into the Christian fold in 1463 and his book was written at its earliest date in 1491, why did it take Mihailović 28 years to decide to exhort his fellow Christians into action?  In those 28 years Bosnia was conquered and Serbia lost the Battle of Kosovo Polje (and event Mihailović refers to in his writings).  Surely his observations could have been of use much earlier.

On aspect not discussed often in medieval history is the mental toll of those who lived through the battles and upheaval.  While certainly these events were seen differently than today, research is just starting into the effects of things like PTSD in history’s warriors.  And surely Mihailović must have had lingering mental effects from switching back and forth between religions in a time when religion was the most important way that people of that time defined themselves.  Mihailović was thoroughly inculcated into Christianity as a child, then forced to convert to Islam.  While he later skirts the issue, the truth is that religious conformity was expected in the Ottoman empire and Mihailović was also a member of an elite fighting force with strong bonds of brotherhood.  He spent 18 years as a Janissary, thoroughly catechized in an Islam that was embedded deeply in everyday life.

And then that, too, was gone.

There are no other mentions of Mihailović from third-person sources.  We don’t know what his contemporaries thought of him.  But we do know that few Janissaries chose his path of casting aside their new Muslim identities, even those who did not attain Mihailović’s rank.  We don’t know anything about his brothers and their fates.  We don’t even know when Mihailović died.

All we know is that at some point, nearly thirty years after he returned to the Christian world, he felt the time had come for him to pass on the intelligence he possessed to Europe’s rulers.