The Many Named People 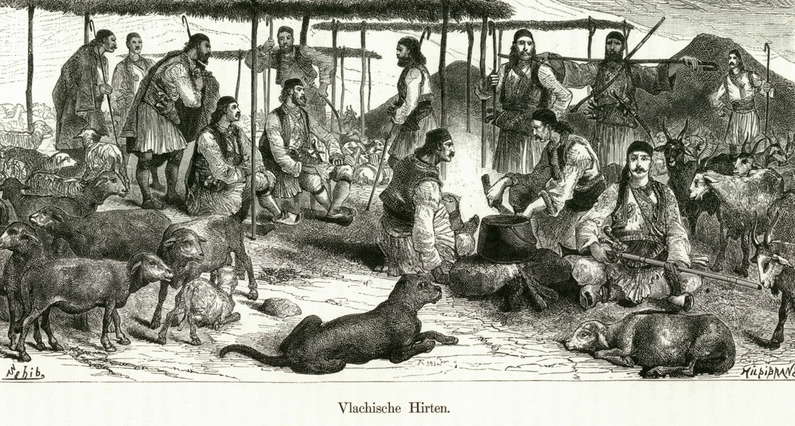 The Many Named People

Although most have since assimilated to their respective countries, for over a thousand years a non-Slav shepherd minority existed in the Balkans, speaking a Latin-based language and following their own traditions.  The Vlachs, also known as the Choban in Romania, the Vlasi in Slavic areas, the Tsintsar in Serbia, and officially as the Arumani, first coalesced as a people-group in the Roman colonies of Greece in the second century BCE as Roman occupiers raised families with the native Illyrian and Thracian people.  Their semi-nomadic lifestyle of herding sheep and breeding horses kept them a bit removed from the developing Slavic language, although they did tend to adopt the Eastern Orthodox religion.

The main distinguishing features of the Vlachs have long been their Romance language and their transhumance ice, which involved migration between summer (highland) and winter (lowland) pastures. —Nicolas S Balamaci, 1995

The largest population of Vlachs is in Greece, where most are completely assimilated and many have lost their Vlach language, which is not taught in Greece.  However, there is a significant minority of Vlachs in Albania, and pockets of Vlachs in Macedonia and Serbia as well.

The Vlach people were first mentioned around 976, when they were described as guides and guards of Roman caravans in the Balkans.  Their lifestyle lent them easily to this task, as their herding and wanderings mean they knew every inch of the mountains throughout the Balkan region.  They carried on with this when the Ottomans conquered the area – the only Christians who were given equal legal treatment with Muslim citizens in the Ottoman Empire.

The Ottomans used the Vlachs as guides, but also in the logistics of moving supplies and as quick-action raiders – but eventually these privileges began to end and the Vlachs moved their loyalties over to the Habsburgs.

Although there were legal differences levied on the Vlachs throughout their history – Dušan’s Law forbid intermarriage between Vlach and Serbs, for instance, it wasn’t until the late 1800s that trouble really started – but when it did, it started big.

For the first time, the Vlachs were recognized officially as a separate ethnic nation in the Treaty of Berlin in 1878. In 1880, the Vlach community began opening schools that taught in their Arumanian language and churches that said the mass in Arumanian in Greece and Macedonia.  Local Greeks took this as a slap in the face, and began a campaign of intimidation in Vlach areas.  They attacked churches and arrested a schoolmaster who dared to teach in Vlach.  Raids into Vlach villages terrorized the inhabitants until 1905, when the Ottoman Sultan released an official decree recognizing the Vlachs in the Ottoman Empire and affirming their rights to maintain their schools and churches.  Unfortunately, rather than protection, it caused the Greek terror incursions to double down.

Priests were murdered, villages were burned to the ground, and schools were razed – all for daring to use the Vlach language in their teaching and mass.  It’s probably no surprise that they ended up forming a “Roman Legion” to fight with the occupying Italians in World War I, especially with the promise of their own separate Principality of the Pindus national area.

That promise was never carried out, and again the ethnic Greeks targeted the Vlach population.  Numerous arrests and imprisonments of prominent Vlach citizens resulted.

After World War I, it seemed the only way out of the constant discrimination and bigotry was to move to another nearly-Balkan country that spoke a language close to the Arumanian of the Vlachs – Romania.  Greece was happy to see the Vlachs go, as they needed to resettle thousands of Greeks gained in a population exchange with Turkey  Romania had empty land in Dobruja, and offered incentives for their “returning sons”.

However, not all the Vlachs left, and during World War II the Vlach Roman Legion was reconstituted to fight with Italy between 1941 and 1943.  This did not endear them any further to the Greeks who lived around them.

Today there are still isolated Vlach villages, but people of Vlach ancestry have also served in high political offices in multiple Balkan countries.  The “Aromanian Question” has also come before the UN, asking whether Aromanian/Vlach people consider themselves a separate nationality or fully integrated into their nation of residence.  This question is not cut and dried – both sides are represented within the Aromanian/Vlach community.  A large number of Vlachs in the larger Greek cities argue against additional schools which teach the Vlach language, as they heavily value their status as a “fully assimilated” minority.

In fact, when Aromanian activist Sotiris Bletsas was arrested in 1995 for distributing material about the Vlach language at a festival, a leader of the Vlach community testified against him at his trial for disseminating false information.

Bletsas was convicted in 2001 to an international outcry, but his conviction was overturned.  It still stands as a fairly recent example of the uncomfortable relationship still being navigated by this little-known community.