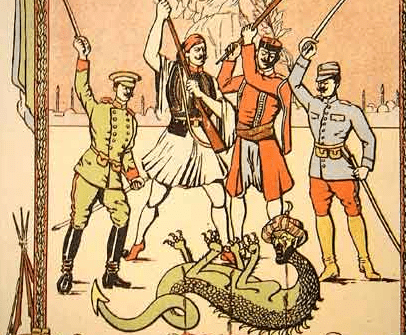 The nineteenth century wasn’t a great time for the Ottoman Empire.  It wasn’t the worst time, that would be the beginning of the twentieth century when everything collapsed.  But for an empire that had been the strong conqueror of Europe out of Asia, it was a catastrophe.

The coming fall of the Ottomans was so obvious to everyone that Tsar Nicholas I of Russia referred to it as “the sick man of Europe” in 1853.  The nickname stuck.

And where the Ottoman Empire was failing, the rest of Europe was eager to step in.  Russia, pushing forward with a program of a “Pan-Slav Identity”, began meddling in the nascent nationalism stirring in the Balkans.  The Great Powers of Europe, Austria included, stepped in military to help the Greeks win independence, which the Ottomans recognized in 1830.  With Russian support, Serbia was able to demand first autonomy (in 1817) and then was granted independence with the Treaty of Berlin.  Russia overtly fought the Ottomans in order to secure Bulgarian independence.

The Ottomans were bleeding territory, and Russia was hungrily gathering the pieces of the dismantling empire under a pan-Slav banner.  Austria-Hungary was less than amused, and made its own forays into the roiling politics of the Balkans in order to prevent the Russian Empire from overwhelming Europe with its newly acquired sphere of influence.

It was under these auspices that the Great Powers of Europe acted together to dial back the string of victories that granted so much new territory under the Pan-Slav banner.  The 1878 Treaty of Berlin forced Russia to give back some of their gains in the Treaty of San Stefano, post Russo-Turkish War.  It also gave defacto recognition to the independence of Serbia, Romania, and Montenegro.  Austria-Hungary itself would administer Bosnia and Herzegovina. And finally, rather than allow the “Greater Bulgaria” of the Treaty of San Stefano that so horrified Austria-Hungary, Bulgaria’s borders were significantly diminished and it would still be an autonomous province of the Ottoman Empire. The Bulgarians weren’t even invited to the table that was going to decide their future.

In 1908 Austria-Hungary formally annexed Bosnia and Herzegovina, cutting off Serbian hopes to add the territory to Serbia and provoking the Bosnian Crisis.  And it was in 1908 that Bulgaria formally declared independence.  The Ottoman’s Empire was crumbling around its ears, as its internal political strife and inability to modernize was preventing it from regaining former glories. Nationalist movements throughout what was left of the disintegrating empire were rising up, and in September 1912 the weakness of the Ottomans became crystal clear.

On 4 September 1912, the Ottoman Empire capitulated to the demands of the Albanian insurgents, who had been in revolt since that January.

In the shadows, a hidden alliance saw their chance and acted immediately – on 6 October 1912 the First Balkan War began.

The treaties themselves reflected very different desires for the future of the Balkan region.  The Serbs desperately wanted access to the Adriatic, and planned to fulfill this by annexing parts of Albania.  Bulgaria was aware of the Serbian plans, and agreed to support them, in exchange Serbia agreed that Bulgaria would annex Macedonia.  Greece wanted the issue of Crete, and the other islands in the Aegean finally solved – in their favor, of course. And orchestrating the entire dance was Russia and their advocacy of a Pan-Slavic movement meant to allow Russia access to the Mediterranean through a series of Balkan alliances.  Russia was not just a puppet master, however.  It had proven a devotion to panslavism with their earlier support – up to and including war on behalf of other Slavic nations.

Officially, in the lead up to the First Balkan War, the Great Powers of Europe supported the territorial integrity of the Ottoman Empire.   Aside from Russia’s behind-the-scenes urging of action, France quietly made it known that they would not abide by their mutual defense treaty with Russia if it was triggered because of actions in the Balkans.  The British were supporting Greek movements toward Balkan resistance to the Ottomans.  Austria-Hungary wanted to push back the Ottomans, but was also severely resistant to further Serb land gains in the region.

On 16 September 1912, the Russian Military Agent in Montenegro sent the following message to the General Staff in St. Petersburg:

“The military convention which has been concluded between Montenegro and Bulgaria in the form of an exchange of opinions is at present in Sofia awaiting confirmation.  It is, in brief, as follows:  Both sides pledge themselves to begin the war with all their forces, Montenegro no later than 28 September, Bulgaria no later than one month after the Montenegrin action.  Montenegro is pledged to involve as great a number of Turkish troops as possible, Bulgaria pledging to pay 70,000 francs during every month of the war, in consideration of the fact that Bulgarian preparations are not yet complete, a postponement of the beginning of war operations is possible.

It has been agreed to confront Serbia with the alliance with Bulgaria and the beginning of hostilities as a fait accompli; our foreign minister must be informed of the fact that they have begun to transport war material to the frontier.”

Clearly stated was the agreement that Montenegro was to begin the First Balkan War, which is exactly what happened on 6 October 1912 under the Balkan League’s stated aim of removing the Ottomans completely from their remaining European territory. To the utter shock of the Great Powers of Europe, the four Balkan nations were able to drive the Ottomans back on their own, without any help from those who saw themselves as the arbiters of all European politics.

Albania, whose recent victory over the Ottomans had triggered the actions of the Balkan League in the first place, acted quickly in an attempt to stop Serbia’s plans of Adriatic access through Albania.  Ever quick to be the fly in the ointment of Serbian expansion, Austria-Hungary agitated with the Great Powers to form a pathway for Albanian independence, which was declared on 28 November 1912, with borders guaranteed by the Great Powers.

The Balkan League continued to push back the Ottomans, with victory after victory.  Initial overtures for peace in London were rejected by the crumbling empire, but by 30 May 1913 they were unable to continue.  Other than Constantinople and a small sliver surrounding the city, the Ottomans had been totally driven from Europe by a coalition of small former provinces. Other than the inviolate area of Albania, it was left to the Balkan League to divvy up the newly independent territory.

It was in success that the Balkan League fell apart.

Serbia, which was occupying Central Macedonia, refused to abide by the territorial portion of their treaty with Bulgaria, stating that the independence of Albania had completely changed the situation. With the Albanian coastline now off limits, the Serbs brokered a new deal for Adriatic access through the Greek city of Thessaloniki.  In order to reach Thessaloniki, however, Serbia would need to retain the portion of Central Macedonia they had under occupation in spite of the treaty promising all of Macedonia to Bulgaria.

Incidentally, the best illustration of how strongly Serbia felt about retaining Central Macedonia is clearly the vignette created when the Serbian army entered Skopje and, upon asking seven-year-old Vaska Zoicheva what she was and hearing her reply of “Bulgarian!”, the Prince of Serbia slapped her face.

Nor was Greece in a hurry to hand over any of the areas in Eastern Macedonia that they were occupying.  Not only was Greece busily founding villages to show that they had prior claim to the Macedonian land, but the Greeks and Bulgarians had already fought  each other, at Nigrita on 5 March, before the First Balkan War was even over.  Athens citizens saw the writing on the wall, “Our next war will be with Bulgaria,” they said.

Two weeks after the First Balkan War ended on 30 May 1913, the Second Balkan War began on 16 June 1913 when Bulgaria attacked Serb and Greek forces.  This time Romania joined the offensive against Bulgaria, and the Ottomans jumped right back in with an attempt to regain territories. By 17 July, one month later, the Bulgarians were asking Russia to broker a peace.

The Second Balkan War was ended with the Treaty of Bucharest on 28 July 1913.  Brokered, as usual, by the Great Powers, Serbia would be allowed to keep their portion of occupied Macedonia.  Greece was also able to keep their portion of Macedonia, with further territorial concessions of all but three Aegean islands under their occupation.  Montenegro also gained territory, albeit much less than the other participants.

The surprise beneficiary of the war was Romania, which emerged demanding remuneration for remaining neutral in the first war and demanding to be allowed to retain their size advantage over Bulgaria through territorial grants of areas with large Vlach populations.  Although Romania’s demands were highly criticized in the independent press at the time, the Great Powers took the demands into consideration.

In the end, Bulgaria saw her winnings significantly whittled down through losses to Serbia, Romania, and territory they were ordered to return to the Ottomans.  In retrospect, it seems as though backlash should have been expected. That backlash would bubble over within a year, when World War I would begin in the Balkans.